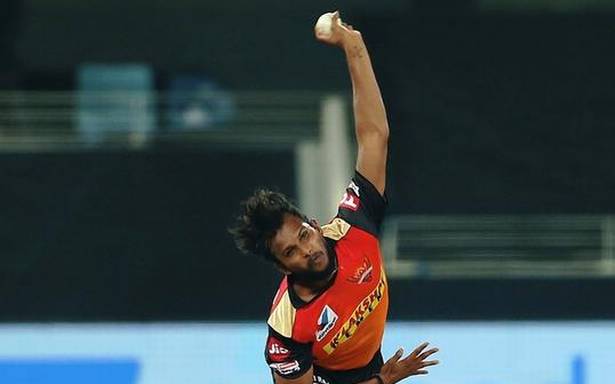 Sunrisers Hyderabad mentor V.V.S. Laxman believes left-arm pacer T. Natarajan can be the X-factor in the Indian attack in the future.

“I am not surprised by his selection for the Australian tour, for which he was originally named as a net bowler. Being a left-armer, Natarajan will be the X-factor. Probably that is the reason the selectors wanted him and drafted him as a full-time member of the squad,” said Laxman.

The 29-year-old Natarajan was one of the standout performers for SRH this season, with 16 wickets.

“I am sure he will succeed against the Aussies after the way he performed in the IPL, which is like any international tournament featuring the best from across the world. He will do well if he reads the surface and bowls the right line and length,” Laxman told The Hindu.

“Natarajan really works hard and executes the defensive deliveries very well. Earlier, he didn’t get too many opportunities because the team had the likes of Siddharth Kaul, B. Sandeep and Bhuvneshwar Kumar as the frontline bowlers.

“We preferred him over Khaleel Ahmed and once Bhuvneshwar was ruled out with an injury, he became an important cog in the attack.

“Natarajan has been known for sending down the yorkers very well. But I must say he has got a lot of variations which he didn’t use in the IPL. He has the sharp bouncer, slower one, off-cutter and wicket-taking ability with the new ball,” Laxman said.

“Natarajan has the mindset and the confidence to bowl yorkers, which we generally believe are the toughest to deliver. His dismissal of Royal Challengers Bangalore’s A.B. de Villiers was the pick of the lot. It showed the kind of confidence he now has as a bowler.”

Laxman’s message to Natarajan: take care of the body and workload.