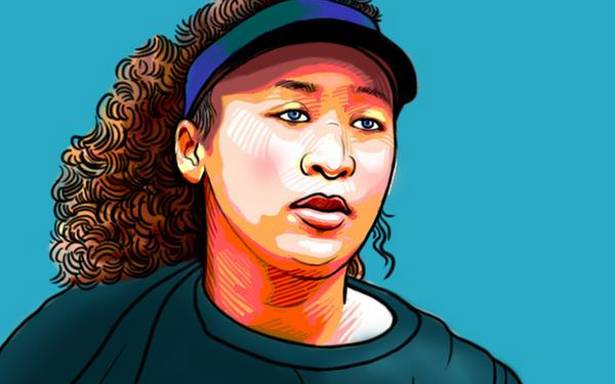 Anointed the next big thing in women’s tennis, she duly won her first Major at the 2018 US Open by beating Serena in the final. Since then, she has won three more hard-court Majors, established herself as one of the world’s best, and according to Forbes, is the best-paid female athlete ever, earning $55 million from endorsements alone in the past 12 months. All through this success, her calm and poise have stood out and the head that wore the crown didn’t seem to hang heavy. This was especially true during that US Open final, which will be equally remembered for Serena’s run-in with the chair umpire and the partisan crowd booing Osaka for denying Serena a record-equalling 24th singles Grand Slam.

Off court, Osaka’s was a leading voice in the Black Lives Matters movement against police brutality. Born to a Japanese mother and a Haitian-American father, she has lived nearly all her life in the U.S. At the 2020 US Open that she won, she wore seven masks for seven matches, each highlighting the name of a victim of racial injustice.

Seen in this context, Osaka’s decision ahead of the ongoing French Open to shun the obligatory press conference because she didn’t want to “subject herself to people who doubt her” and her refusal to engage on the same with tournament authorities seemed surprising. For someone who had taken to the big stage like duck to water — she has more Slams than WTA Tour titles, four to three — and lit up the occasions she graced with refreshing candour, it seemed out of step.

After the first-round victory, Osaka skipped the media interaction and was immediately threatened with a default. A day later, she withdrew from the tournament, and her statement acknowledged that her initial message could have been clearer and better-timed.

Also, for the first time, Osaka detailed her struggles with depression and anxiety, setting the stage for reflection. The terms of the debate, however, had been set by then.

Osaka is probably the first of global tennis superstars to have lived a life entirely under the influence of social media. The absolute control of the message it offers has often led to players shunning conventional media and even see them as adversarial. But as Osaka found out, while one-way communication offers freedom, there is very little space for dialogue and certainly no immunity from the backlash a loosely worded or wrongly timed message can potentially generate.

Osaka’s first statement did mention the word “mental health” but it seemed generic and instead of driving a much-needed conversation on mental well-being of athletes, which would have also taken those rookie players down the rung along, it led to discussions on her below-par record at the French Open and Wimbledon, something the 23-year-old ostensibly wanted to avoid by refusing to talk to the media. She has not progressed beyond the third round at either event. Bred on the hard courts of the U.S, Osaka has a power game best suited for acrylic, on which the bounce is true and a repeatable technique works. Clay and grass demand fleet-footed movement, sharp instincts and patience, all of which are still works in progress for Osaka.

While solutions to the clay and grass riddles will take time, her ascent as one of the biggest sporting icons has been rapid. Osaka’s stardom has come at a tenuous time for a deeply divided America and the world. Where globalisation and multiculturalism are under increasing strain, Osaka, with her cultural diversity, is being projected as the poster child by the liberal order.

She also represents Japan, which ironically is a nation with one of the least ethnically diverse populations, and is gearing up for the Tokyo 2020 Olympics with Osaka being one of its biggest attractions.

Such is her pull and heft that when she initially withdrew from the semifinals of the 2020 Cincinnati Open to protest against police violence, the organisers decided to suspend the tournament for a day in solidarity. In an era where corporate sponsors mostly play it safe, this was an astonishing stand taken by the powers that control a global sport which has interests across democracies, autocracies and oligarchies.

The present episode in Osaka’s nascent career is probably the first to stir some resistance. When the temperatures eventually cool, the hope is for better outcomes for all stakeholders, including players, media and the fans.