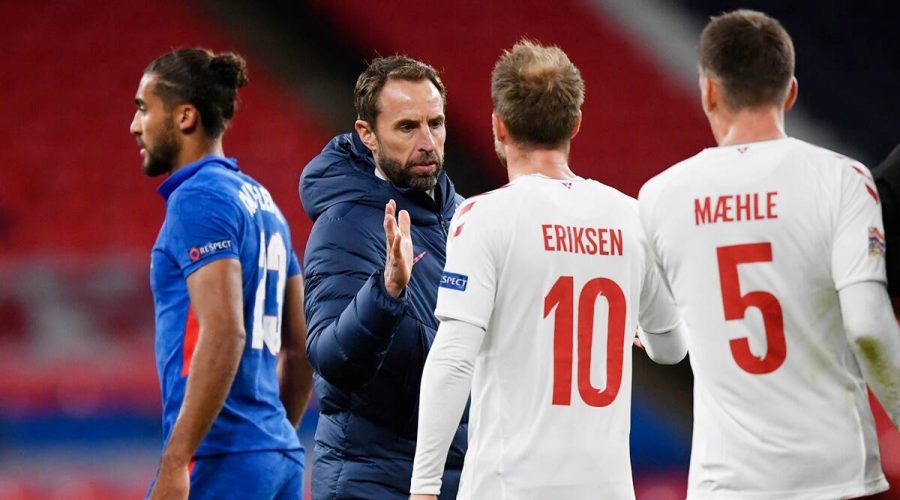 Two England players were sent off in the same game for the first time in England's 148-year history. Indiscipline among England players is becoming a concern for Gareth Southgate.

“We’ve had an incredible chain of things to deal with,” Southgate said, reflecting on the challenges after an unwelcome landmark night in the team’s history.

Harry Maguire being red carded during the game and Reece James being dismissed for dissent after Wednesday’s 1-0 loss to Denmark meant two England players were sent off in the same game for the first time in the team’s 148-year history.

On-field misconduct brought an end to a third consecutive gathering of the England squad, and that has left Southgate grappling with off-field issues.

In November 2019, Raheem Sterling was dropped following a training ground altercation with Joe Gomez as the Manchester City-Liverpool rivalry spilled over into international duty.

Because of the COVID-19 pandemic, it took almost 10 months for the squad to gather again. And Maguire never even got to check in to the hotel.

On a farcical day, Maguire was selected by Southgate for September’s Nations League games even as the Manchester United captain was being tried in absentia in Greece after a holiday melee. Once the verdict came in hours later _ he was found guilty of assaulting a police officer and attempted bribery while on holiday _ Maguire was dropped from the England trips to Iceland and Denmark.

It put England players on notice of the standards expected of them. The message didn’t get through to Phil Foden and Mason Greenwood. They celebrated making their England debuts in Iceland by meeting up with women at their Reykjavik hotel.

Even in non-pandemic times that would have breached squad rules. But the misdemeanor was exacerbated by the women being from outside of a biosecure bubble designed to limit the players’ risk of exposure to the coronavirus.

Medical precautions forced Southgate to send Foden and Greenwood home. They were dropped for this month’s triple header.

Yet, Southgate’s message about having to respect coronavirus regulations still didn’t get through to his squad.

In the case of Tammy Abraham, Ben Chilwell and Jadon Sancho, national rules were not followed when they were pictured at a gathering of more than six people a couple of days before they were due to link up with the England squad.

Southgate couldn’t risk them being near the squad until medics could be sure they didn’t have the coronavirus. They all missed a 3-0 victory over Wales in a friendly last Thursday. Chilwell eventually left the squad through another illness. Abraham was declared fit but not used, while Sancho was only a second-half substitute in Sunday’s 2-1 win over Belgium and the loss to Denmark.

It was against Denmark that Maguire’s second rash challenge in the opening half hour left England having to play most of the match with 10 men.

There was sympathy, not scorn from Southgate.

“To go down to 10 men is costly for the team. But we fully back him, we fully support him. He has been a top player and is a top player. He will come through it.”

It has not been an easy start to the season for Maguire at United, either. The world’s most expensive defender was in the lineup that lost 6-1 to Tottenham before the international break. And he is now awaiting the outcome of an appeal process against the conviction and suspended 21-month sentence in Greece.

“He has got a little spell at the moment where a lot of things are going against him,” Southgate said. “But he has got to show the resilience I know he has to come through that.”

The dismissal of James as tensions continued after the final whistle did frustrate Southgate.

It’s “Obviously something as a young player he has to recognize is not acceptable,” Southgate said. “I thought his individual performance was outstanding with and without the ball.”

But a first game in England’s starting lineup will be remembered for how it ended for the 20-year-old Chelsea right back.

It’s only a month until England plays another three games in this congested pandemic-impacted season. It’s a chance for the squad to regain its self-control