The continuation of I League was on Wednesday thrown into doubt after multiple COVID-19 cases were reported among participating teams, staying and competing inside bio-bubbles.

It has been learnt that more than 10 people, including at least seven players, have tested positive for the virus after tests conducted on Tuesday.

Five players from Real Kashmir FC and at least one each from Mohammedan Sporting and debutants Sreenidi Deccan FC were among those who returned positive results.

“Five players and three officials from Real Kashmir and at least one player each from Mohammedan Sporting and Sreenidi Deccan FC are among those positive cases,” a top league source told PTI.

The outbreak happened at the Novotel Hotel, one of the three bio-bubbles, set up by the organisers for the football League that began on Sunday.

Besides RKFC, Sreenidi Deccan and Mohammedan Sporting, the three other teams staying at the Novotel Hotel are Rajasthan United, Aizawl FC and NEROCA.

An emergency meeting of the League Committee has been called to take a decision on continuation or suspension of the league.

“We are having an emergency meeting of the League committee at 4pm to decide on future course of action. The safety of players and officials is paramount,” I-League CEO Sunando Dhar said.

Dhar did not divulge the exact number of positive cases.

“There have some positive cases reported among certain #HeroILeague teams. The League is keeping a close tab on it and have already spoken to the clubs. In addition, an emergency meeting of the League Committee has also been summoned in the afternoon. Further details soon,” tweeted the official handle of league.

Thirteen teams are competing in this year’s I-League across three venues — the Mohun Bagan Ground in Kolkata, the Kalyani Stadium at Kalyani and the Naihati Stadium at Naihati.

RKFC owner Sandeep Chattoo admitted some of his team’s players have tested positive, though he did not share how many and who.

“Yes, RKFC has also some positive cases, players from all (six) teams are suspected (of COVID-19). But we have not yet been told officially by the league organisers or the AIFF,” he said.

“There was one round of tests on December 21 and all my players were negative. These latest tests were done yesterday.”

He said the next few matches may be postponed but hoping that the I-League continues.

There are no matches scheduled for Wednesday.

Sreenidi, Mohammedan Sporting, NEROCA and Aizawl FC have matches on Thursday while RKFC have a game on Friday.

All the players and officials were required to remain in quarantine for six days in their respective hotels after arrival from there bases. They were to be tested twice during those six days.

As per the protocols laid out for the league, anyone who tests positive will be isolated on different floors of the hotel and will have to have three consecutive negative test results before joining the team-mates.

Dhar had earlier said that all the players taking part in the I-League will have to be fully vaccinated except for U-18 players and those who have recently recovered from COVID-19 infection.

The U-18 players and those who have not got their jabs due to recent COVID-19 recovery will have to undergo more frequent testing during the tournament than the vaccinated players.

“If the fully vaccinated players are having tests for every 5-6 days, they (U-18 players and recently recovered players) will be tested every 3-4 days,” he had said.

Last season’s I-League, which was competed by 11 teams, was also held under bio-secure environment in Kolkata and Kalyani, and six COVID-19 cases were reported then.

Arsenal manager Mikel Arteta will sit out Saturday’s Premier League game at home to Manchester City after testing positive for COVID-19, the club said on Wednesday.

Arsenal are fourth in the table on 35 points after 19 games, 12 points behind leaders City.

“Mikel is isolating in line with Government guidelines and we wish him well,” Arsenal said in a statement.

Arteta previously tested positive in March 2020, shortly before the pandemic forced the Premier League to shut down for more than three months.

A record 103 positive COVID-19 cases were found among players and staff in the Premier League over the past week following a raft of fixture postponements during the busy festive period.

Britain reported a record 129,471 new cases of COVID-19 on Tuesday as it battles a surge in infections fuelled by the Omicron variant.

The Catalans have been hit by a number of cases in their squad, with Clement Lenglet, Dani Alves, Jordi Alba and Alejandro Balde also returning positive tests this week.

“Dembele, Umtiti and Gavi are positive for COVID-19 after PCR tests on the squad. The players are in good health and self-isolating at home. The club has reported the cases to the relevant authorities,” Barcelona said in a statement. 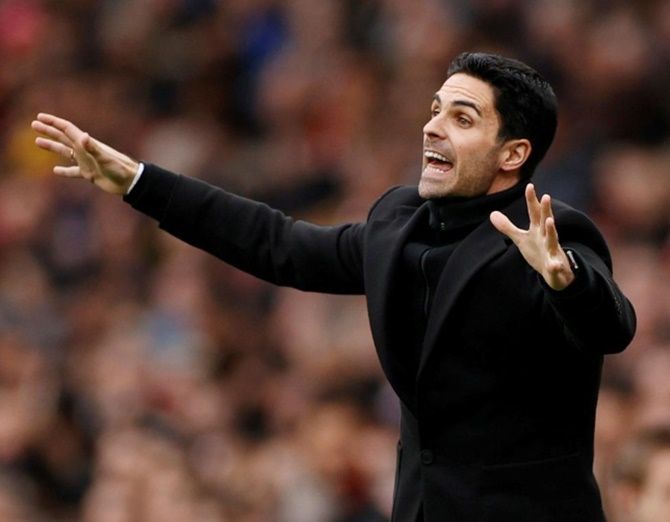