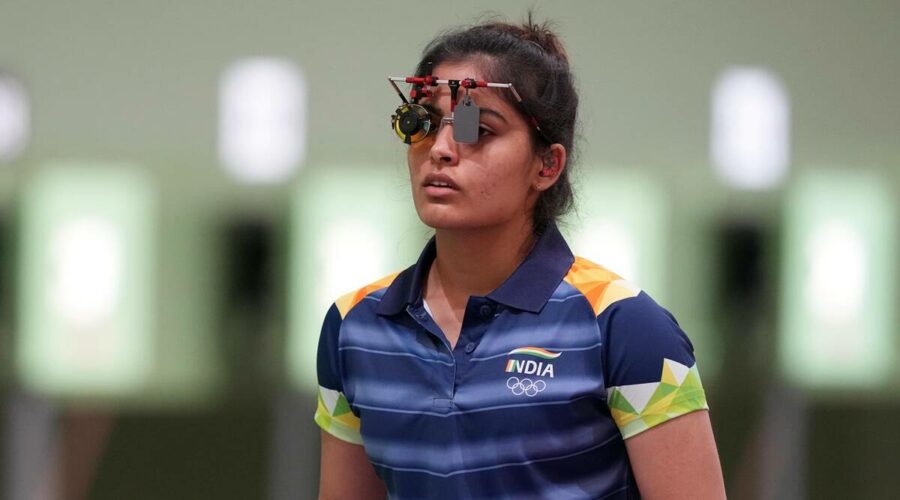 It’s been four months since shooting ace Manu Bhaker returned from the Tokyo Olympics, where a spot in the finals eluded her in the three events she took part in. But the 19-year-old, who was considered a favourite to medal at the Games, is yet to overcome the demons of the Tokyo disappointment.

“I am still dealing with it. It’s still in the process,” the 2018 Youth Olympic gold medallist told The Indian Express before leaving for the President’s Cup in Wroclaw, Poland.

In the run-up to the Olympics, Manu had shown great promise bagging golds at several World Cup events but had found the mega event a step too high. The pressure, she says, was unlike any other competition she took part in.

“It was the first time I felt so much pressure. I couldn’t sleep during the night. It was a rollercoaster. Unexpected, of course. I couldn’t deliver as well as I expected. I was very disappointed. During the day too I was feeling anxious and chaotic. Anxious because of the competition. Things didn’t go my way,” says the Haryana athlete.

Manu’s debut Games campaign took off on the wrong foot with her rifle malfunctioning during her second series in the 10m air pistol event. What started as a minor glitch in the lever of the pistol, eventually forced Manu to replace the whole circuit and left her fighting against time. Manu finished 12th in the qualification round where only the top eight progress to the finals.

“When I fixed the lever and adjusted the grip and I inserted the circuit, it stopped working. So it was like a double problem. I was blank. I wasn’t expecting so many problems in an air pistol. I changed the circuit as well and went into my lane and I asked for sighters. I had thought of switching the pistol itself but the organisers’ system couldn’t get the sighting mode on the computer. My time was going (lapsing) so I had to shoot. I had no option,” Manu explained.

Manu was so distraught that she went back to her room and broke down. “I cannot explain. I am not expressive about my feelings. I was sad and disheartened. I did not sleep that night. Is that even a question? It’s obvious (I broke down). Of course,” said the youngster who has won more than two dozen international medals, most of them being gold.

The Tokyo debacle, as expected, drew a lot of heat from fans on social media. The critics had a free go at the shooters, especially Manu, who couldn’t meet the high expectations of desperate fans from the Games. But Manu was unfazed since she has always tried to keep off from social media. As far as the harsh criticism is concerned Manu feels it’s part and parcel of an athlete’s life.

“That’s (the criticism) fine. People appreciate me also. Certain people will try to pull you down no matter what. And likewise there will be so many who stand beside no matter what. It’s what side I see,” feels Manu.

Post Olympics Manu took a much-needed break from the sport and took a small family vacation to Kerala. The break helped her break the monotony of competing and training – something Manu has been incessantly doing for the last five years. The break also helped ease certain stiffness the youngster was feeling in her shoulders, arms and back due to the workload.

“The idea was to sort of come out of the shooting zone. I was continuously shooting for five years in a row and I never took a break or an off. Even during the lockdowns, I was training constantly at my home. I never missed my physical or training sessions. I was undergoing some muscle stiffness also. The vacation was necessary and relieving,” she says.

The break and recalibration seem to be working for Manu as she has been on a medal spree in her competitions post-Tokyo. At last month’s Jr Worlds in Lima, Peru she bagged four golds and a bronze. At the President’s Cup, Manu bagged her second gold (25m Rapid Fire Pistol Mixed team) on Tuesday just a couple of days after bagging gold in the 10m Air Pistol Mixed Team event.

Manu though feels the recent medal rush post Games won’t act like a balm for Tokyo. “The Olympics is different. The setbacks also feel different for every competition. You cannot balance it out. It’s not like you win in a new competition, and it evens out the loss you faced in the previous event,” says Manu.
The Olympics hurt will probably stay with Manu for a bit longer but she is ready to wait it out patiently until her next shot. “Waqt se pehle, aur kismat se zyada kuch nahi milta,” (you don’t gain anything before the right time and above what is pre-destined), she says philosophically, sounding all grown-up.