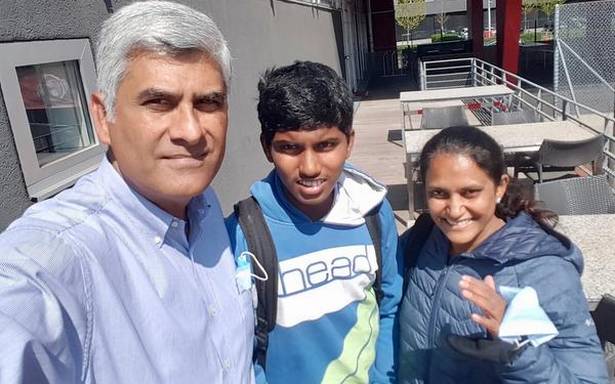 He has the potential to become a world-class player, says Vasudevan

Manas Dhamne is thrilled to be training with one of the leading coaches of the world, Riccardo Piatti, in Italy.

But, he is disappointed that he has to withdraw from the Indian team for the Asia-Oceania World junior tennis event in Kazakhstan in June.

“Manas felt sad as the Kazakh travel did not work out,” said dad Manoj Dhamne.

After training for a week last year with Piatti, who has coached Novak Djokovic, Ivan Ljubicic, Richard Gasquet and Milos Raonic among others, Dhamne had to wait for long to return to Italy owing to the pandemic.

S. Vasudevan, a member of the Indian team that reached the Davis Cup final in 1987, helped Dhamne to get to Switzerland, train for a week, play an ITF junior tournament and then move to the Piatti base.

“Tennis-wise he has a great potential to become a world-class player. He beat an 18-year old in the ITF junior event in Sierre.

“He is for sure in great hands with Piatti. I really hope he will turn out to be a champion player,” said Vasudevan when contacted at his base in Switzerland.

Dhamne also impressed at the Swiss Tennis Academy in Biel. “Dhamne is a very dedicated boy. He listens carefully and brings it on the pitch. He hits the ball very clean and can also accelerate well. He is already very big for a 13-year-old,” said Peter Frey of the academy, which has good coaches and “world-class fitness trainers”.

Dhamne did use many months of waiting time to compete in the ITF junior tournaments in India, apart from finishing runner-up in the National under-18 championship.

The high standards of physical fitness, demanded by tennis in Europe, will take some time for Dhamne to acquire.

After Dhamne won the under-12 singles title and finished runner-up in doubles in the Eddie Herr championship in Florida in 2019, the International Management Group (IMG) extended support to him to train in Europe.