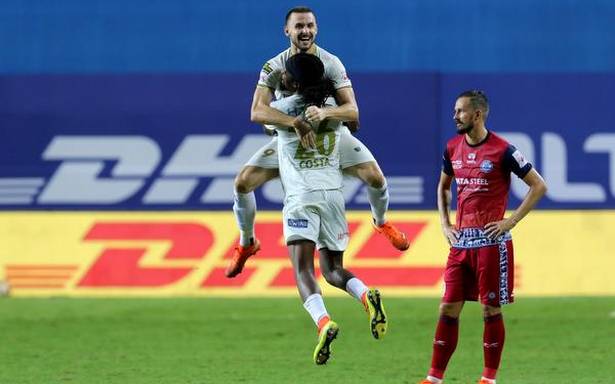 Murray’s brace does the trick for the Kerala side

It was all about excellence during set-pieces and goalkeeper errors on Sunday as 10-man Kerala Blasters defeated Jamshedpur FC 3-2 in a Indian Super League match at the Tilak Maidan in Vasco.

With teammate Lalruatthara sent off after receiving a second yellow in the 67th minute, Kerala forward Jordan Murray completed a brace within three minutes, scoring in the 79th and 82nd.

The Australian’s first goal came off a Jessel Carneiro throw-in which was headed away by JFC defender Stephen Eze. The ball eventually fell to KBFC’s Facundo Pereyra, whose shot was diverted by Rehenesh towards Murray, who found the back of the net.

The 25-year-old attacker then extended the lead through another move involving Pereyra, who sent in a through-ball into the box. Rehenesh once again messed up a straightforward save as he failed to collect the ball.

Nerijus Valskis pulled a goal back in the 84th as he headed home a Mohammad Mobashir cross from the right. But it wasn’t enough for The Men of Steel.