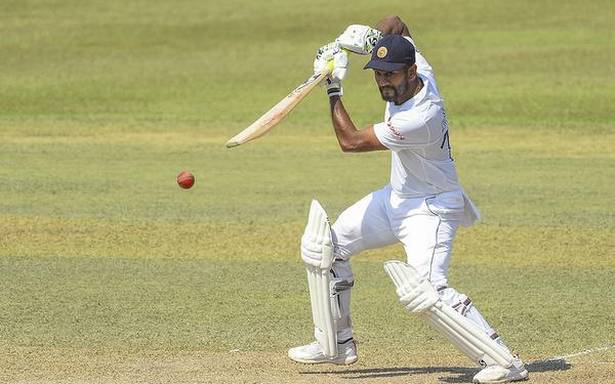 Dimuth Karunaratne led Sri Lanka to 229/3 in its first innings at stumps on the third day of the first Test, still 312 runs behind Bangladesh’s mammoth 541/7.

There was little threat from Bangladesh seamers when the Sri Lankans started their reply but the two spinners — Taijul Islam and Mehidy Hasan — were rewarded for some tight bowling on Friday.

Karunaratne batted for more than five hours for his 85 not out as play was extended on day three to catch up for time lost due to bad light on Thursday.

Karunaratne was given out leg before wicket to Taijul but the decision was overturned after the batsman reviewed with the ball missing by some margin.

Lahiru Thirimanne (58) was cruising with some cracking strokes before he was dismissed off the final ball before tea by Hasan to make it 114/1.

Despite the excellent batting conditions, Oshada Fernando was caught down legside to Taskin Ahmed’s delivery for 20.

Sloppy footwork from Angelo Mathews resulted in his dismissal for 25.

The experienced campaigner went on the back foot to a full delivery from Taijul that he should have played on the front foot. The ball sneaked past the bat and crashed onto the stumps.

Karunaratne and Dhananjaya de Silva (26 not out) have added 39 runs for the fourth wicket as Sri Lanka saw off some tense moments without any further damage.

Sri Lanka confirmed that Lahiru Kumara is nursing a hamstring injury and his availability for the rest of the game will be known on Saturday morning.

Pallekele, Sri Lanka, April 23, 2021 (AFP) – Scoreboard from the third day of the first Test between Sri Lanka and Bangladesh in Pallekele on Friday: