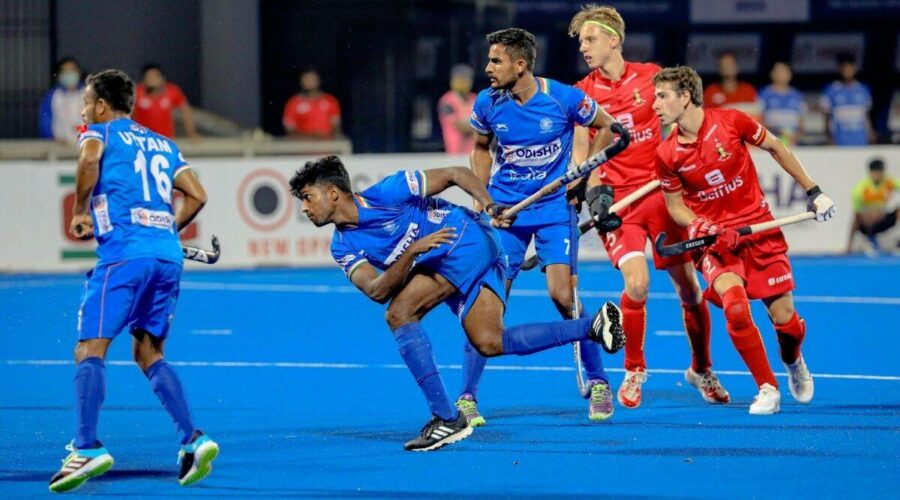 It was a commendable defensive performance, papering over some cracks, especially in attack, where India were unable to create even one clear scoring opportunity. For almost 15 minutes before the push-back, their penalty corner specialists flicked fast, knee-high shots at their two goalkeepers, preparing them for India’s battery of drag-flickers. Or to be specific, for Sanjay Kumar – the Junior World Cup’s best corner specialist so far, alongside France’s Timothy Clement.

Each of Kumar’s drag-flicks had followed this pattern. So, it was hardly a surprise that Belgium’s last-minute revision was around these low, hard flicks. And 20 minutes into the Junior World Cup quarterfinal, the question was asked of them. Turns out, however, they weren’t prepared for a question out of the syllabus.

Sanjay, as usual, was standing on top of the ‘D’ when the ball was pushed out. The Belgian rushers sprinted in his direction to block his shot but instead of going for it himself, Sanjay twisted at the last second and laid off the ball for Sharda Nand Tiwari, who stood behind him.

Suddenly, Belgium players had to switch directions – the defenders had to turn right and the goalkeeper, who had positioned himself to save a low shot, was in no man’s land. It gave Tiwari enough time to step forward, pick his spot and slot the ball calmly into the top corner, giving India the lead and leaving Belgium scratching their heads.

In the past, India have often been accused of being too one- dimensional from set-pieces. That they have four penalty corner specialists in this squad who have varying styles was hence seen as a positive. But this was an ace up their sleeve which few would have anticipated. Germany, India’s opponents in the semifinals following the 1-0 win on Wednesday, would have made a note, having watched the game from the stands.

Given how India played, their notes, one can assume, would have run into several pages.

There were many takeaways for coach Graham Reid from this match.

One was the ability to score from the only chance that fell their way, which was refreshing given how wasteful India have been in the past from penalty corners. But even more impressive was the fact that they were able to hold on to that slender lead, surviving a barrage of Belgian attacks towards the end.

Indian players showed composure beyond their age and something that is fast becoming a key characteristic of the national teams, senior and junior. This kind of controlled, defensive work is something that’s usually associated with European teams, Belgium being one of the masters of it.

On Wednesday, India weren’t always in control, especially in the last two quarters when Belgium literally threw the kitchen sink at them. But the defence showed calmness and made very few errors as they successfully fended off every opposition raid on their goal.

Reid employed zonal defence against a side that was pressing very high up, almost choking his players for space. Each player guarded his own area, with the responsibility being to intercept passes and make sure the ball did not get to the intended target.

Poor interception and trapping were India’s undoing in the defeat to France, another of the semifinalists. Against Belgium, these two facets were near flawless. More than the goal he scored, Tiwari’s defensive contribution was even more immense along with those of Sanjay, Yashdeep Siwach and Manjeet.

In the third quarter, Belgium made five dangerous entries into the ‘D’ but each time, they ran into a stubborn Indian wall. In the final 15 minutes, when they upped the tempo, Belgium were successful in drawing out a few errors and creating panic in the Indian defence. But during those moments, goalkeeper Pawan – who switched quarters along with Prashant Chauhan – pulled off some remarkable saves. And on the occasion when he was beaten, there were defenders to make goal-line clearances.

It was a commendable defensive performance, papering over some cracks, especially in attack, where India were unable to create even one clear scoring opportunity.

And while India’s forwards did not have many attempts at the Belgian goal, another takeaway from Wednesday’s win – given that the Junior World Cup is a window into the future – is the depth of talent that Reid has at his disposal.

While the performance of both goalkeepers and drag-flickers bodes well for the senior team, the abundance of attacking talent within the U-21 ranks is also an encouraging sign.

The hosts were dealt a blow on match eve when Maninder Singh, one of the key players in attack and a reliable stopper during penalty corners, was ruled out due to a hamstring injury. His replacement, Boby Singh Dhami, did not let India feel Maninder’s absence, especially in the first half.

Like Maninder, whose runs asked probing questions of opposition defences in the group stage games, Dhami was always finding ways to run behind Belgium’s defence. He did it with a lot of grace too, beautifully using his wrists to change the direction of the ball and swerving his body to send defenders the wrong way.

As Belgium stepped up the gas in the second half, parking themselves inside the Indian half, Dhami and the other Indian forwards did not have much to do, attack-wise. But the forwards put in an extra shift, defending deep in their own half to shield the backline.

Once again, it was uncharacteristically Indian. Just like the penalty corner variation, which ultimately proved to be the difference between the two teams. “This was just one of the many surprises we have,” Tiwari said after the match. “We’ll unleash them one after another.”

France vs Argentina, India vs Germany (both on December 3)