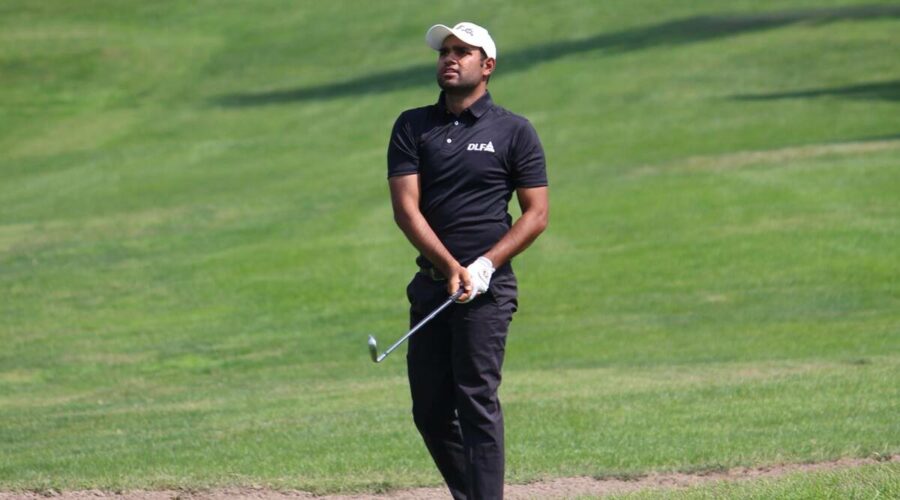 Kartik Sharma fired the day's best score of 65 to be tied second place with Angad Cheema and Shravan Desai at the J&K Open in Srinagar. Six-time PGTI winner Honey Baisoya of Delhi enjoyed a modest four-shot lead after playing an error-free game for the third successive day at the J&K Open at the Royal Springs Golf Course in Srinagar on Friday.

Rookie Kartik Sharma (69-72-65), in good form with his top-20 finishes in season opener Hyderabad Golconda Masters and Panchkula Players Championship, produced the day’s lowest score of 65 to take a leap of 15 spots to tie second at 10-under 206. Angad Cheema (69-71-66) of Panchkula fired a 66 climbed 10 spots and Shravan Desai (69-68-69) of Ahmedabad struck a 69 on Friday to share the second place with Kartik

Honey, who has been struggling since picking a title in 2018, attributed his consistency in Srinagar to his 2-iron and his new putter.

Overnight joint leader with Khalin Joshi of Bengaluru by one shot, Honey collected three birdies each on the front-nine and back nine.

On the seventh, he found the rough twice but recovered with a 12-feet conversion and on the ninth, Baisoya’s approach from 155 yards lipped out but still helped him to a birdie.

“I’ve not played well in a while so I was nervous from the start of this event. But I’ve been hitting my 2-iron well and that helped set up a lot of opportunities for me. I made 17 greens in regulation today and 16 each on the first two days,” said Honey, who last won a title in 2018.

“My new putter has also helped my scoring. I missed the cut last week because of my poor putting so I’m glad that I changed my putter just a day prior to this week’s event.”

Southpaw Kartik sank six of his seven birdie putts from a range of 10 to 20 feet during his 65.

Angad picked up his first birdie on the sixth, an outstanding recovery from the fairway bunker and was bogey-free which took him to 66. Shravan mixed five birdies, on the ninth it was a chip-in, with two bogeys in his round of 69.

Rashid Khan of Delhi, Khalin and Mani Ram of Karnal were in tied fifth place at nine-under 207 while Tokyo Olympian Udayan Mane of Pune and Gurugram’s Veer Ahlawat were a further stroke back in tied eighth position. PGTI Order of Merit leader Karandeep Kochhar of Chandigarh and Delhi-based Kshitij Naveed Kaul were in a share of 13th place at six-under 210.