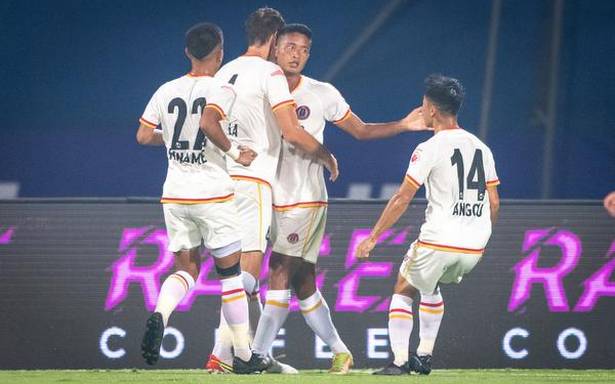 SC East Bengal and Bengaluru FC played out a 1-1 draw at the Bambolim Stadium on Tuesday, but it was the former which emerged with more credit.

Semboi Haokip’s first-half goal was cancelled out by an own goal by Saurav Das as a winless East Bengal remained rooted to the bottom of the table.

But the spirited performance will lift the mood as interim coach Renedy Singh embarks on a tough rebuilding job.

For BFC it was further evidence that one positive result will not clear the fog that has seemingly set over the team. Much was expected after the win over Chennaiyin FC, but on show was yet another disjointed effort.

The first-half witnessed some slow and sluggish play from BFC, but it was also because East Bengal’s defensive shape was solid.

The Kolkata side almost doubled the lead on 40 minutes, but Daniel Chukwu couldn’t connect with an inch-perfect cross from Lalrinliana Hnamte.

Marco Pezzaiuoli introduced Sunil Chhetri at the break and BFC made multiple forays into the box, only to find a match in the towering Adil Khan.

But the pressure soon told when Roshan Naorem’s cross from the right was deflected goalward by East Bengal midfielder Sourav Das and goalkeeper Arindam Bhattacharja dived over the ball to let it through.

Chhetri could have put BFC ahead in the 72nd minute, but his clean strike off a cut-back from Roshan was kept out by defender Hira Mondal. Soon after at the other end, Haokip could have made it a night to remember but missed a gilt-edged chance, failing to get even a half-decent shot in when he had just the goalie to beat.