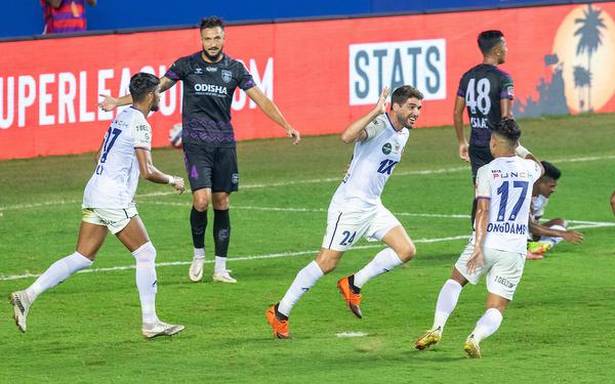 After the break, the Odisha men seemed determined to strike back. And they did.

FC Goa may have seen a change of coaches these past few days, but its players ensured there was no change of trend for the team in the ISL. It drew with Odisha FC 1-1 to take its unbeaten run to four games.

After the Goans took the lead shortly before the break, their new coach Derrick Pereira may have entertained hopes of a dream start to his job, but he is unlikely to be too displeased with the result. For, it was a close encounter, and Odisha had come strongly back in the second half.

Jonathas De Jesus had found the equaliser for Odisha eight minutes into the second half. Goa’s goal was scored by Ivan Gonzalez.

Just 17 minutes into the game, Goa had a setback when its striker Airan Cabrea was injured and had to leave the field; he was replaced by Nongdamba Naorem.

The first half some fine end-to-end football, but neither side could break through till a few minutes left for the half-time whistle.

The deadlock was broken by a goal that came off a free-kick from near the right corner flag.

The well-floated kick by Alberto Noguera, who had an excellent game, was met by an Aiban Dohling header. The finishing touch was provided by Gonzalez, who slotted the ball home from just in front of the post.

After the break, the Odisha men seemed determined to strike back. And they did.

Jonathas raced in swiftly to convert the cross from Nandhakumar Sekar, who had been given a fine through ball by Javi Hernandez. It was a well-deserved equaliser for Odisha.

There is no change in the table for either side: Odisha is seventh with 10 points and Goa eighth with eight.