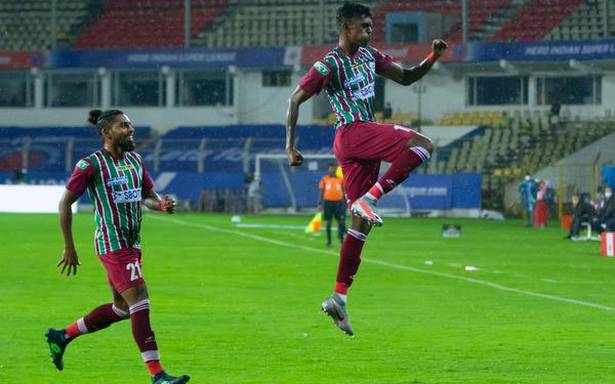 Boumous scores a brace in the Kolkata side’s victory

Hugo Boumous made his debut for ATK MB with a pair of goals while Roy Krishna (penalty) and Liston Colaco scored one each. Samad Abdul Sahal and Pereyra Diaz scored were the scorers for Blasters.

The ATKT MB was in attack mode from the word go as Boumous converted his team’s first attack into a goal with a fine angular finish.

There was a hint of controversy as Krishna appeared to be interfering with the shot coming from an off-side position. The referee thought otherwise and upheld the goal.

Boumous, the Frenchman who tormented ATK MB last season with his creativity for champion Mumbai City FC, used his arsenal to good effect, switching over to the former in this edition.

Sahal gave a glimpse of his talent as he scored the equaliser for Blasters with a nice finish in the 24th minute. The scoreline was altered soon as Krishna, who was tripped inside the box by Blasters goalkeeper Albino Gomes, found the net from the resultant penalty in the 27th minute (2-1).

ATK MB consolidated the lead in the 39th minute when Boumous breached the Blasters defence again to make it 3-1.

The change of ends did not alter the balance much and ATK MB made it 4-1 in the 50th minute when Colaco came up with a world-class finish.

Blasters pulled one back in the 69th minute through Argentine Pereyra Diaz but it was not enough.