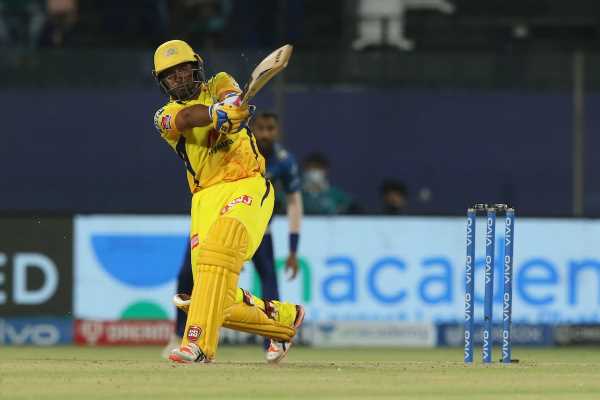 Images from the IPL match between Chennai Super Kings and Mumbai Indians, in Delhi, on Saturday.

Blazing knocks from Moeen Ali and Faf du Plessis at the top of the innings, and Ambati Rayudu later, enabled Chennai Super Kings post an imposing 218 for 4 in the Indian Premier League match against Mumbai Indians, in Delhi, on Saturday.

Ali and du Plessis scored 58 and 50 respectively in a 108-run partnership for the second wicket before Rayudu, who notched his fifty off just 20 balls, fired 72 runs off just 27 to give the three-time champions their highest total against the defending champions.

Ravindra Jadeja also chipped with a handy knock of 22 runs. 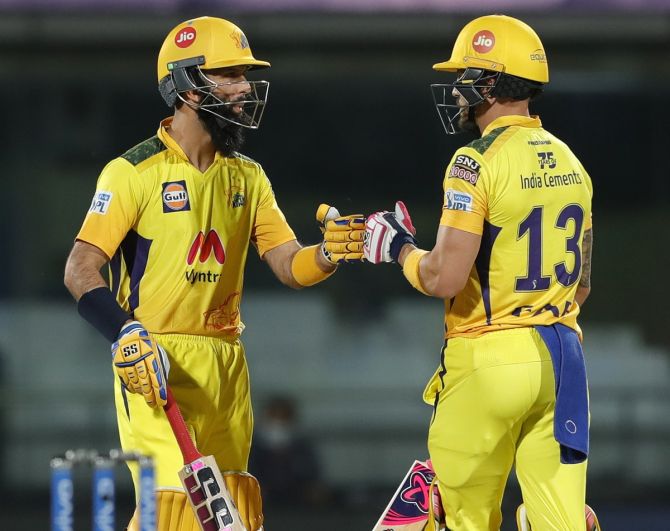 Jasprit Bumrah went for 56 runs in his four overs, while Trent Boult took one wicket for 42 runs.

Mumbai Indians won the toss and decided to bowl first. They made two changes to the side that beat Rajasthan Royals in the previous match. Dhawal Kulkarni came in place of Nathan Coulter-Nile and Jimmy Neesham for Jayant Yadav.

Chennai Super Kings chose to go in with same eleven that trounced SunRisers Hyderabad in their previous match.

The in-form pair of du Plessis and Ruturaj Gaikwad opened the batting for CSK, but it was pacer Boult who gave Mumbai Indians a dream start, dismissing Ruturaj Gaikwad.

Gaikwad scored a four off second delivery, but got a leading edge off the New Zealand pacer’s fourth ball, which carried to Hardik Pandya at backward point.

Gaikwad was out for 4 off 4 balls, and CSK were 4 for 1 after the first over. New batsman Moeen Ali watched from the other end as Du Plessis took on Dhawal Kulkarni in the next over, hitting him for a four and six as 11 runs came from the second over.

Moeen then sent Boult for a six and four in the next over as CSK took 12 runs from it to get to 27 for 1.

The two batsmen guided the Super Kings to 49 for 1 at the end of the powerplay overs, with Moeen scoring 26 off 19 balls and du Plessis 17 off 13.

The 50 of the innings came up in the seventh over, from which only four runs were scored. But the duo went on the rampage after that, getting 16 from the ninth, bowled by Rahul Chahar. Moeen brought up his 50 with a single off the second delivery of Neesham’s second over and then hit two fours off the bowler to take CSK to 95 for 1 at the end of the 10th, which fetched 18 runs.

Du Plessis then hit Jasprit Bumrah for two successive sixes and a four before the pacer ended the 108-run partnership for the second wicket by dismissing Moeen with the fifth delivery of the 11th over.

The England batsman tried to guide the ball behind the wickets but could not get enough power and wicketkeeper Quinton de Kock easily gloved the offering. Kieron Pollard was introduced in the 12th over and he struck immediately, dismissing du Plessis and Suresh Raina, playing his 200th IPL game, off successive deliveries.

He had du Plessis caught by Bumrah at short fine leg off the penultimate delivery of the 12th over and Raina caught by Krunal Pandya off the last ball. Ambati Rayudu, who came in at the fall of du Plessis’s wicket, took a few balls to settle down before launching into the Mumbai bowlers. He hit Dhawal Kulkarni for two sixes in the 16th over as CSK collect 17 runs to get to 153-4.

16 runs came off the 17th over, bowled by Bumrah. Jadeja hit two fours and Rayudu two sixes to take CSK to 174 for 4. Boult returned for his last over in the 18 and conceded just three runs off the first three balls before Rayudu hit him for a six, his fifth off the innings, off the next delivery. A four off the fifth  ball brought up his 50 off just 20 balls. He ended the over with a six  as Boult bled 20 runs and CSK were 194 for 4 at the end of the 18th.

Jadeja brought up the 200 of the innings with a four as Bumrah conceded 10 runs in the penultimate over and CSK were 204-4.

Rayudu hit a six and four off the last to balls of the final over, bowled by Kulkarni, to enable CSK finish with 218-4, their highest total against Mumbai Indians.