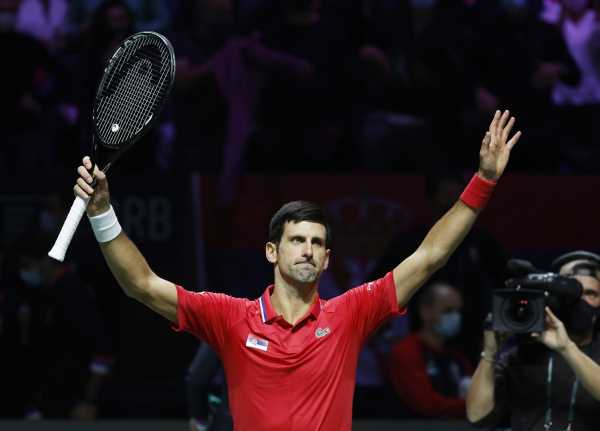 Imperious Novak Djokovic sent Serbia into a Davis Cup semi-final against Croatia. The world No. 1 inspired a comeback victory over Kazakhstan, in Madrid, on Wednesday.

Serbia had their backs to the wall when Kazakh veteran Mikhail Kukushkin beat debutant Miomir Kecmanovic in a three-hour epic in the first singles rubber.

But Djokovic calmly levelled the tie with a straight-sets defeat of Alexander Bublik before returning to court to team up with Nikola Cacic and beat Kazakh pair Andrey Golubev and Aleksandr Nedovyesov 6-2, 2-6, 6-3.

Djokovic has played five out of a possible six rubbers at the Davis Cup Finals so far and looks in the mood to take the team to the title they won memorably in Belgrade in 2010.

When Cacic, who had struggled during the second set, drilled a low return to enable Serbia to clinch victory on their third match point, Djokovic and his team mates celebrated loudly.

Kazakhstan, who were cheered throughout by a noisy band of followers in the Madrid Arena, have now lost all six Davis Cup quarter-finals they have contested.

“I’m proud of the fighting spirit; we dropped off in the second set but we bounced back and held our nerves, I’m proud of Nikola and proud of this team,” Djokovic said on court.

Serbia will take on Croatia on Friday in Madrid.

The other semi-final will be between Germany, who defeated Britain 2-1 on Tuesday, and either the Russian Federation or Sweden.

Kazakhstan moved tantalisingly close to the semi-finals when the 33-year-old Kukushkin came through a three-hour-18-minute battle against the 22-year-old Kecmanovic.

Kecmanovic did little wrong but just could not put away his opponent in a match that veered one way and the other.

Serbia captain Viktor Troicki elected to go with world number 69 Kecmanovic ahead of more experienced options and it looked to have paid off as the player rose to the task.

Kukushkin, now ranked 182 but once inside the top 40, began slowly as he dropped his opening service game, but his experience showed as he took the first set on a tiebreaker and led 4-2 with a break in the second set.

Kecmanovic found another level, however, and won seven games in a row to snatch the second set and move 3-0 ahead in the decider before Kukushkin dug in.

Kukushkin saved five break points to avoid falling 4-0 down and, throwing caution to the wind, he saved three match points as Kecmanovic served at 5-3.

Kecmanovic was the first to reach match point in the tiebreaker but blazed a forehand long at 6-5.

The Serbian showed great resilience to stave off four match points but Kukushkin finally got the job done when he took the breaker 13-11.

Djokovic was never troubled by the unpredictable Bublik in a 6-3 6-4 victory — his 17th successive Davis Cup singles win.

His class then told in the decider as he carried his team across the line.