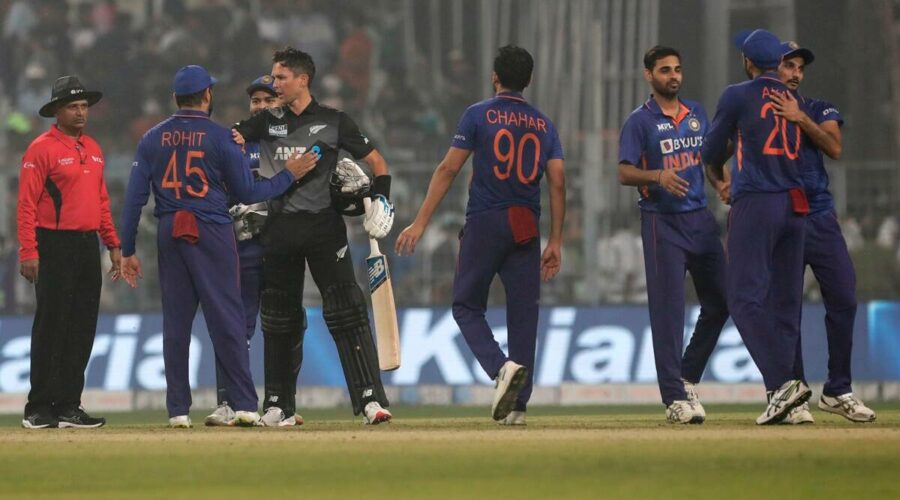 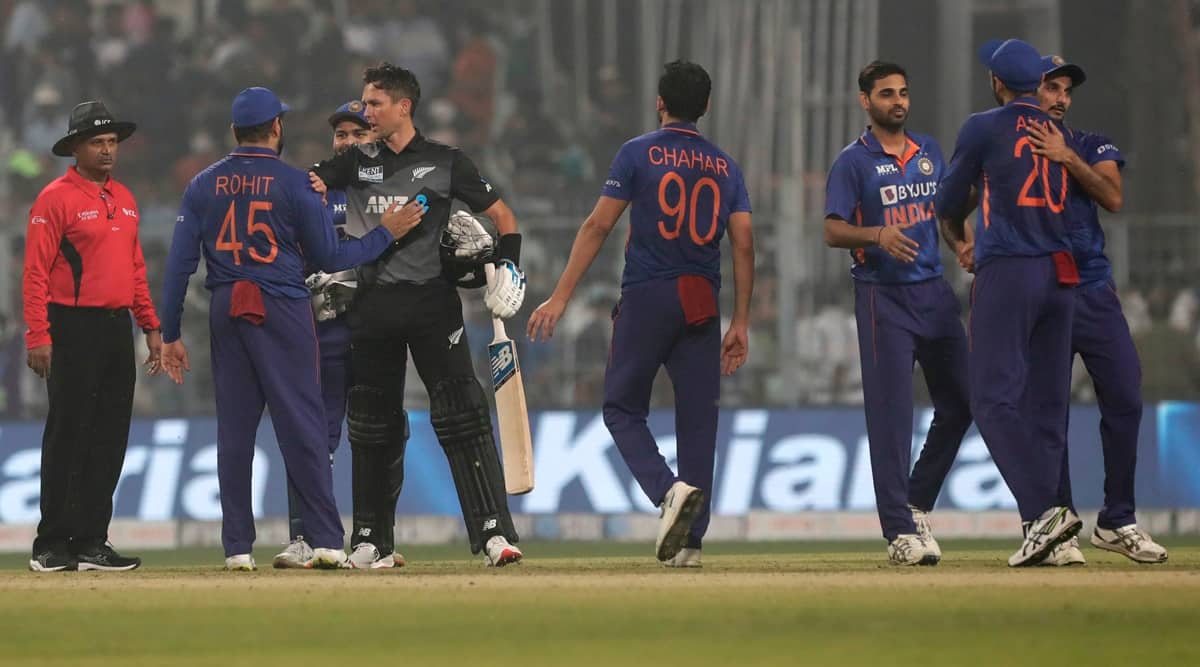 In the second over of the New Zealand chase, three Indian fielders converged to try and take a skier off Martin Guptill. The bowler Deepak Chahar was one of them. He would eventually get closest to the ball amid the confusion but couldn’t make the catch. Skipper Rohit Sharma didn’t hide his displeasure at all.

By the time Chahar came back for his third over, Rohit was in a much calmer mood. He was walking around at his usual languid pace, saying few words, and wiping the wet ball with the most matter-of-fact expression of getting the job done. New Zealand had blown the chase much earlier following a three-wicket burst from Axar Patel. Lockie Ferguson it was now who skied the ball, and Chahar settled decisively under it to formally end the Kiwi chase in the 18th over. It was only the fifth victory for India to go with six defeats while batting first this year (They had won five out of five while chasing). To wrap up his first series as full-time captain after choosing to bat first with an emphatic 73-run win brought out a warm, satisfactory smile from Rohit as he went up to pat Chahar on the back.

Glenn – eagle swoops in at the Eden

“Glenn Phillips’ dual unbelievable saves” is a much-viewed video clip from last month’s IPL game between Mumbai Indians and Rajasthan Royals. Just as one from Ishan Kishan’s edge is about to touch the third-man rope, Phillips comes sprawling across the screen, having run from at least deep point. He squeezes past an advancing Chetan Sakariya – who has to vault over him — palms the ball away, and recovers before Sakariya can, to fire back the throw. Phillips bats, keeps wicket, bowls off-spin and is sharp in the ring. But his acrobatics in the deep regularly make highlight reels.

At Eden Gardens, Kishan was at the other end as Rohit Sharma tucked away what seemed like another four. Only for the turbo-charged Phillips to hare across to deep midwicket. Phillips crashed into the rope and the ball was following him there, but he changed direction instantly, and from an almost horizontal position, goal-kicked the ball to an infielder. Another one added to those unbelievable saves.

In the final over of the first power play, Rohit Sharma hit a couple of fours and of his trademark jaw-dropping “off the hips” six. Among those impressed were the thousands at Eden Gardens, the Indian dug-out and the non-striker Ishan Kishan. The rookie wicket-keeper has seen his perpetual captain – Kishan plays for Mumbai Indians – plays these shots every other day but still he was shaking his head in disbelief. There was a shade of embarrassment too. It was Kishan who was to play the role of a “see the ball, hit ball” opener but Rohit, with a far superior strike-rate, was doing the job. At the end of the over, he would be an inquisitive student asking Rohit questions. He seemed curious about Lockie Ferguson’s “back of the hand” ball, using his gloved hands to show the ball release. New Zealand, in the next over, would change the pace of the game. They would introduce spin. From Ferguson’s hitting the deck variety, it would now be Mitchell Santner’s left-arm spin. More surprise, Ferguson would start with an armer, Kishan would miss the ball. Another armer the next ball and the young opener would nick it behind the stumps. It’s like you prepare for Math but the teacher gives you an English test.

Sitting in the dugout, Rohit Sharma and Rahul Dravid would be wondering how it all went wrong. From 90 off 10 overs, India was 162/7 with just 9 balls to go. Dravid would have slight hopes as Deepak Chahar was at the crease. Earlier this year, Dravid was in-charge of the India white ball team that went to Sri Lanka. Chahar had played the innings of his life and helped India score an unlikely win. He reminded everyone that it wasn’t a fluke and the world better start seeing him as a useful lower-order batsman, if not an all-rounder. He scored 21 from 8 balls. His one six off Milne reminded you of tennis on high-bounce hard courts. Short ball on the off-stump and Chahar made room, swung the bat ferociously and swatted it over the bowler’s head for a six. Chahar on the crease had shades of Djokovic on the baseline. Among those impressed was Sourav Ganguly. He would give the full view of the beaming smile by removing the mask hanging on his chin. Meanwhile, Rohit, from the dugout, would acknowledge the audacious shot with a salute. The fly on the dugout roof couldn’t confirm but it is likely Dravid would have said: “Didn’t I tell you, he can bat?”

Until the SKY falls down

Suryakumar Yadav lofting spin over extra cover is one of the rare classical sights in T20. He is so good at it that it’s almost like he does it for fun. He does it with the turn, he does it against the turn. He often clears the boundary with ease, and rarely does he not place it wide of the sweeper. At times, though, your strength can possess your ego and bring you down.

Mitchell Santner was tossing it up and finding some turn. Suryakumar had just come in, and wanted to get off the mark in signature style. He was done in the air and off the pitch, however, and sliced the ball inches short of point. That only egged him into I’ll-show-you mode, and he repeated the shot next ball. He’d nailed the direction this time, but had found no elevation. Martin Guptill at extra cover happily accepted the gift.