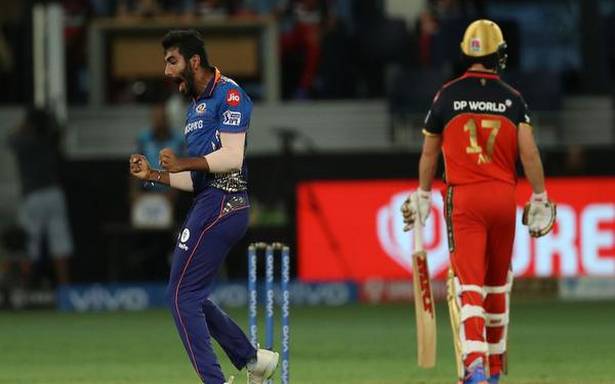 Glenn Maxwell finally came good with an attacking 56 after skipper Virat Kohli’s second consecutive half-century, taking Royal Challengers Bangalore to a par-score of 165/6 against Mumbai Indians in the IPL here on Sunday.

Kohli, who completed 10,000 runs in T20 cricket, scored 51 off 42 balls with three fours and three sixes but it was Maxwell who justified his expensive price tag with a 37-ball blitzkrieg before Jasprit Bumrah brought MI back in the game.

Maxwell’s innings had six fours and three sixes as he showed true destructive potential with switch hits, lap shots and flicks during the final overs when he launched into MI pacers Adam Milne (1/48 in 4 overs) and Bumrah (3/26 in 4 overs) with utter disdain.

Such was the ferocity of Maxwell’s hits that even the normally calm MI skipper Rohit Sharma looked helpless before Bumrah removed both Maxwell and AB de villiers (11) off successive deliveries which at least helped them save 20 to 25 runs in the final two overs.

At the onset, Kohli hit the very second ball of the match from Trent Boult (1/17 in 4 overs) for a six. It was an inswinger which the RCB skipper flicked and Rahul Chahar at deep mid-wicket got his palms but couldn’t latch on to it.

The normally dependable Devdutt Padikkal (0) had an off-day as Bumrah bowled a beauty which pitched on length and moved away taking the outside edge into Quinton de Kock’s gloves.

Kohli found a confident partner in Bharat (32 off 24 balls) as they quickly added 68 runs for the second wicket. Bharath for good measure swept Rahul Chahar against the turn for two sixes while Kohli also imperiously pulled Bumrah for a six over deep mid-wicket.

However Bharat couldn’t convert his start as Chahar bowled one straight and full and the batter didn’t get the required elevation being holed at long-off boundary.

Once Bharat was out and Maxwell came in, RCB despite some great shots couldn’t force the pace as Kohli and Maxwell added 50 runs in seven overs which can never be termed scoring at a great clip.

Maxwell did entertain the crowd with a switch hit six off Chahar.

Kohli also got a reprieve when he tried to cut Chahar and Hardik Pandya at point made a mess of an easy catch by trying to dive when all he required was to move a few paces to grab a regulation catch.

It was a day when the Indian captain was expected to convert his half-century into a big score but he failed to control the pull shot to a delivery from Adam Milne that had extra bounce and substitute fielder Anukul took a great catch running from mid-wicket boundary.

Once Kohli was gone, Maxwell once again upped the tempo with the former Proteas skipper AB de Villiers also hitting a six over long-on off Bumrah. Maxwell picked Milne’s knuckle ball for a second switch hit six and then for good measure used his pace to hit a switch lap shot as RCB crossed the 160-run mark.