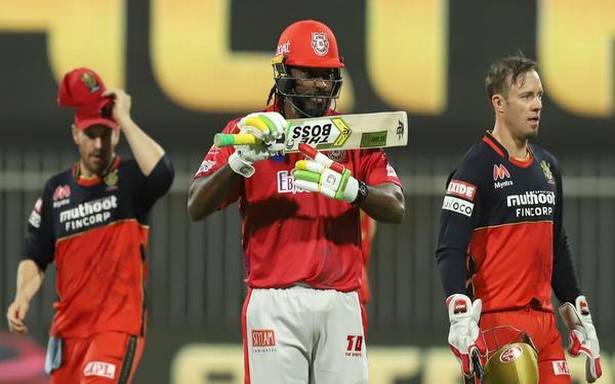 ‘Team is confident when he’s in the middle’

Chris Gayle’s presence in the middle had the team brimming with confidence and the ‘Universe Boss” with a cracking half-century proved his worth during Kings XI Punjab’s win over Royal Challengers Bangalore, said batsman Nicholas Pooran.

Gayle, who was playing his first competitive match since January, overcame a sluggish start to smash five sixes and a boundary in his 53-run knock, helping KXIP snap a five-match losing streak.

“He started slowly, which is acceptable because he hasn’t played cricket in a long while. He has shown once more why he is the greatest T20 batsman. It’s wonderful to see him get runs,” Pooran told teammate Mayank Agarwal during a post-match show for IPLT20.com.

The West Indies wicketkeeper-batsman added that when the 41-year-old Jamaican is out in the middle, the mood in the camp is different.

“To me, he is the greatest T20 player. When Chris is batting, you always feel you have a chance of winning the game. Once he is there, it’s a different mood in the camp. We, as batsmen, would want someone like him in the middle,” Pooran said.

In the first match of the tournament against Delhi Capitals, KXIP had failed to score the required one run from the last three balls and the game went to a Super Over where Kings XI lost the game. On Thursday, K.L. Rahul and his men needed just seven off the final two overs with nine wickets in hand but somehow took the game to the last ball.

With big-hitter Gayle departing off the penultimate ball, Pooran walked in to hit the winning six.

“When the last over started, it was like deja vu. Last three balls, one run it was like the Delhi game all over again but just the difference is that I was in the dugout,” Pooran said.

“A million things were running in my mind, I was not clear, to be honest, what I was gonna (sic) do. I never wanted to be in that position. After sitting out for so long, I have to bat the last ball and 11 fielders looked like 20. Two points is the most important thing for us,” Pooran added.