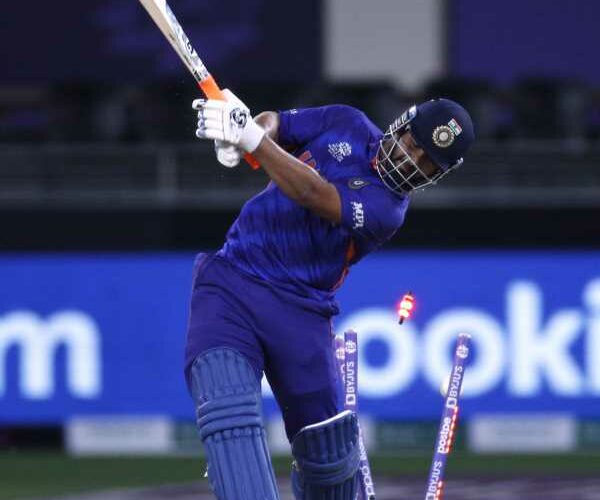 ‘No team has a lower attacking shot percentage than #IND’.
Who would have imagined India would be sitting even below Namibia in the points table?

India’s batting came undone for the second game in a rowat the T20 World Cup as they suffered an eight-wicket hammering at New Zealand’s hands in Dubai on Sunday.

The Indian batting line-up, boasting some of the best players in the IPL, flopped big time managing only eight fours and two sixes in their 20 overs against the Kiwis after being put into bat.

Losing the toss was a big disadvantage as the dew would hamper the Indian bowlers, but there was no excuse for the shambolic batting display on a good wicket which left the bowlers with nothing much to fight for.

When the Indian team was picked for the T20 World Cup, there were eyebrows raised when experienced batter like Shikhar Dhawan and Shreyas Iyer were left out.

Dhawan is one of the great readers of the game when it comes to batting. If the conditions are difficult, he takes his time, but if he gets going right from the start, he proves to be unstoppable.

He is the man for the big occasion and his experience is being sorely missed. Dhawan has hit more than 500 runs in the last three IPL seasons, yet the selectors felt they had a better chance with Ishan Kishan at a big tournament like the World Cup.

With K L Rahul struggling to replicate his form in the IPL, India seem to have no Plan B or a player they can fall back upon.

There is a thin line between bravado and foolishness. And India’s batsmen erred on the side of foolishness with their abject batting display against the Kiwis.

Most of the Indian batsmen were guilty of playing lofted shots in areas where New Zealand had their fielders.

Whoever suggested dropping Rohit Sharma down the order deserves a lot of flak. To accomodate a rookie like Kishan, the Indian think-tank forced India’s best batsman in limited overs cricket to drop down the order.

Kishan thought he was playing at the small outfield of the Wankhede stadium as he took on the square boundary on the leg side, but holed out to the fielder in the deep.

Rahul fell in similar fashion as he took the risk of playing the ball in the air despite knowing fully well that there was a fielder placed on the deep square leg boundary.

On the slow pitch in Dubai, it was important to make most of the Powerplay, but India for the second game in a row struggled as they were reduced to a lowly 35/2 in six overs.

Rohit, who was not opening the batting for only the third time in his T20I career, was dropped first ball but he could only manage 14.

The frustration and pressure of the run rate got the better of Rohit as he fell to leg-spinner Ish Sodhi, once again hitting straight to the fielder at long-on instead of looking to get the ball in the gap.

Virat Kohli allowed the Kiwi spinners to build the pressure as he struggled to nine from 17 balls before he perished in his attempt to break the shackles. He top edged the slog sweep and was caught at long-on Sodhi.

Astonishingly, Indian batsmen, some of whom who have taken apart some of the world’s best bowlers in the IPL, struggled to hit even a single boundary in the middle overs.

Rishabh Pant and Hardik Pandya, who hit sixes at will in the IPL, were struggling to get going as India saw 71 balls without a single boundary in the middle overs between the 7th and 15th over.

Will India regret not having someone like Shreyas Iyer who came back from an injury during the second leg of IPL 2021? Iyer may have not made many runs this IPL, but has been one of India’s batting mainstays in the limited overs format in the last couple of years.

Surprisingly, the selectors opted for the inexperienced Yadav and Kishan for a big tournament like the World Cup.

On the other hand, the selectors were ready to risk a half-fit Hardik at a big event like the World Cup. When he was picked in the team, Chief Selector Chetan Sharma had assured the media that Hardik would bowl his quota of four overs in every match.

Captain Kohli believed Hardik was worth his place in the team as a batsman alone at No 6. The skipper pointed out that Hardik’s attacking batting would help India finish matches, despite the fact that he managed just 127 runs in IPL 2021 at a strike rate of 113.

Hardik didn’t bowl a single over against Pakistan and sent down two listless overs against New Zealand when the match was already out of India’s grasp. He tried hard, but failed to reproduce his old magic with the bat managing just 34 runs in the two games, hitting just three fours in 32 balls in the first two games.

India’s strategy of keeping wickets for a dash at the end has backfired big time. In both the games, India were unable to bounce back after losing early wickets. They have ended up batting far too slowly in the middle overs and their attacking shot percentage is the lowest among all the teams in the Super 12s stage, even lower than Namibia and Scotland.

‘#IND have twice been rocked by early wickets but even then their underlying numbers make for very grim reading. No team has a lower attacking shot percentage than #IND & only #IRE, #PNG & #NED have a worse Timing Rating (a measure of quality of shot contact),’ Freddie Wilde, the CricViz analyst, observed on Twitter.

‘It is worth underlining that these are remarkable numbers. Despite showing the least intent of all 16 teams in this #T20WorldCup #IND have been in control for less than almost every team except three teams who crashed out in Round One (two of them without winning a single match).’

Who would have imagined India would be sitting even below Namibia in the points table after the first two games?

It won’t be a surprise if Afghanistan’s bowlers fancy their chances against this struggling Indian batting line-up.