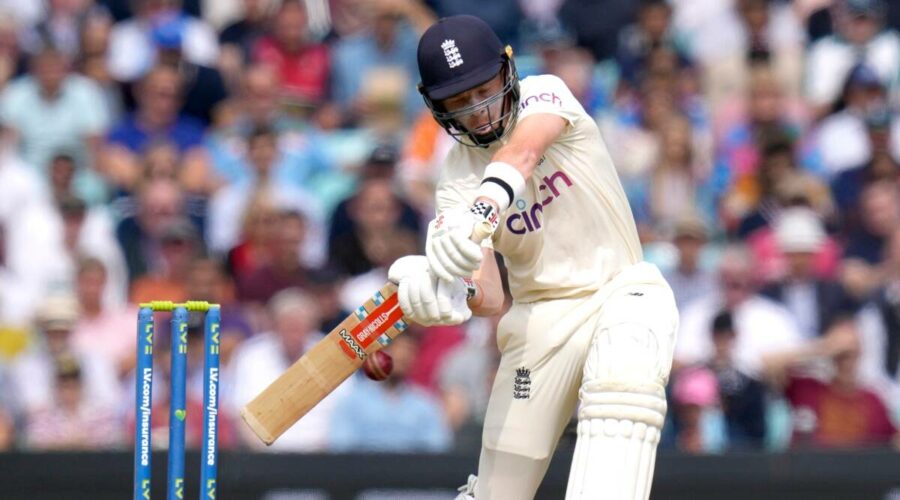 Ollie Pope was not only England’s top-scorer, but also the tone-setter during the second day of the fourth Test against India at the Oval. The quibble that Ollie Pope self-destructed again will rage on. Batting on 81, blazing brighter than the sunshine that bathed The Oval, he hacked a harmless ball onto his stumps. He was so dismayed that he blasted his pad with the bat in anger and trudged back oblivious to the standing ovation of his home crowd. The youngster had looked in infallible, velvety touch, destined to wrap up his hundred as a matter of formality, reasserting his stature as the brightest batting talent in his country with a decisive coming-of-age stride. Yet, he conspired against himself.
Yet, the only aspect to quibble about was that Pope missed the three-figure mark. In terms of quality of stroke-play, aesthetics, temperament and the potential game-changing impact, the knock was of monumental magnitude.

He was not only England’s top-scorer, but also the tone-setter. Given Jonny Bairstow’s reputation to counter-punch, it could be misconstrued that it was the wicketkeeper-batsman who began to counterattack after England plunged to 62 for 5. But it was Pope who began it in an over from Shardul Thakur, blazing him for three boundaries in four balls. First was a straight-drive that was no more than a push off a full delivery that had a hint of in-swing, the second of the trilogy was a wristy clip that purred past mid-on, and the third a pugnacious pull, as if to show that he could be as much silk as muscle.

Those were boundary balls, but a more defensive-minded batsman or less-confident one would have chosen a dead bat, given the precarious position the team found itself in. But Pope, playing his first Test of the series and just hustled on the helmet by Jasprit Bumrah, sensed an opportunity. At that precise moment, India were rattled for the first time in the day. They froze, as Mohammed Siraj and Thakur wilted and surrendered boundaries in abundance.
Virat Kohli then recommissioned the weary Umesh Yadav, who gifted a raft of loose balls himself, none of which Pope wasted. It’s what match-winning batsmen do; they change the tone and texture of a game. India never quite recovered from the blows he dealt them.

In the next couple of hours, they threw everything at him. The left-arm spin of Ravindra Jadeja, the low-flung snipers of Jasprit Bumrah, Yadav’s out-swingers, but Pope was unbreakable in heart and head. He was indiscernible from the nervous wreck he was in the series in India, where he was a man marooned by spinners as he was tormented by Axar Patel and bullied by Kohli.

Middling returns against New Zealand — 22, 20 not out, 19, 23 — was a test of England selectors’ patience and trust, though he had the support of his coach and captain. “He is a talent we should be patient on, and should be persisted with,” coach Chris Silverwood had remarked. A quad injury came as a blessing in disguise of sorts. It gave Pope an opportunity to reanalyse his batting, and he found a change that he needed to make to put his Test career on track.
He had to change his guard. He was standing on off-stump and moving further across. It was a ploy to counter the excessive swing the surfaces offered at the start of the county season. But it made him susceptible to nip-backers. He could make the required adjustment to neuter them in county cricket, averaging 61.66, but less so in Test cricket. New Zealand’s bowlers didn’t need a second invitation, as they set him up with out-swingers, which he would leave comfortably, before slithering one back into his pads. Two of the three times he got out against the Kiwis were in this fashion.

READ | India stay in the hunt at Oval

Stiller at the crease

The Indian bowlers resorted to the same ploy, but this time, the 23-year-old had changed his guard to the more conventional middle-and-leg. He also trimmed his shuffle across, like Joe Root. It made him stiller at the crease and no part of his body moved when he contacted the ball. He still had the tendency to go hard at the ball at times, but it did not prove costly.

Similar balls that were his nemesis against New Zealand turned out to be boundary-scoring opportunities as he twirled them through the leg-side with his malleable wrists. It might have been a sickening sight for India’s bowlers, to behold their nip-backers at full pelt on a dead surface being brush-stroked to the leg-side fence with the deftest of touches. It, though, was a canvas that Pope left incomplete. The only quibble that could be held against him.