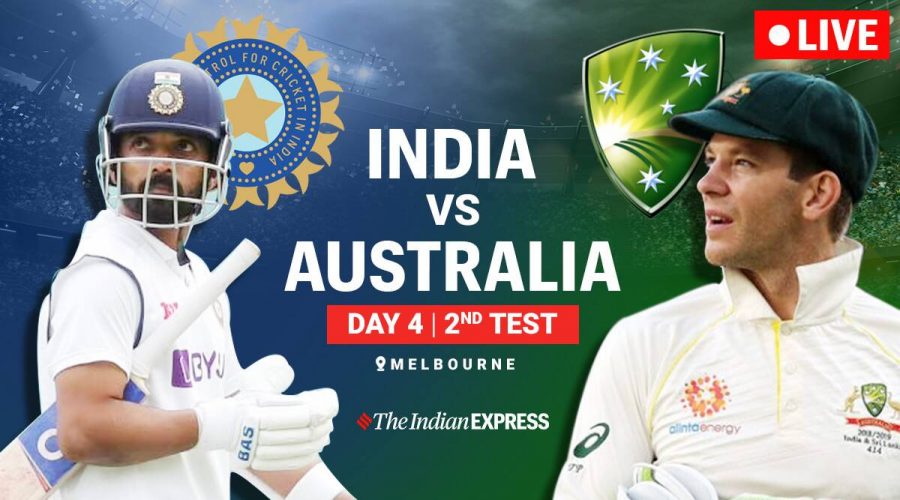 India vs Australia (IND vs AUS) 2nd Test Day 4 Live Cricket Score Online Updates: India are chasing victory in the 2nd Test, with Australia building on their slender overnight lead with Cameron Green and Pat Cummins still in the middle.

Australia faces a big challenge to avoid defeat in the second cricket Test against India at the Melbourne Cricket Ground as they take on each other on Tuesday, Day 4 of the Boxing Test. Leading by just two runs overall, Australia will resume its second innings on Tuesday on 133-6. Cameron Green (17 not out) and Pat Cummins (15 not out) have added 34 off 112 balls for the seventh wicket and hanging on grimly. A depleted Indian attack shrugged off an injury to paceman Umesh Yadav to rout Australia’s batsmen and give themselves a platform for a series-levelling victory. India’s performance represents a stunning reversal of form, following an embarrassing eight-wicket loss in Adelaide in the first test of the four-match series.

India take the new ball in the 81st over. Bumrah brought back. No Siraj yet. Ashwin continues. Green slashes a cut against Ashwin for four – the first boundary of Dy 4 comes after 52 minutes. Australia cross 150 in the 82nd over. This pair continues to take sneaky singles.

Jadeja comes on too, Siraj taken off. Rahane managing his bowlers smartly with a barrage from Bumrah and Siraj presumably to follow the second new ball spell set to follow now. It’s time for a spin combo now, with Cummins and Green ticking the scoreboard along risklessly. 50 partnership comes up, off 191 balls – the niggest partnership of this innings.

Ashwin making things happen! Gets an outside edge off Cummins again. In the 76th over, he finally thinks he has got his man. The ball turns sharply into Cummins’s pads. Ashwin convinces Rahane to go for the Review. But Ball Tracking shows the ball would have been going over the stumps. India lose a Review, both teams have 1 Review remaining.

Another chance! Ashwin gets an edge to balloon up from Cummins. But there’s no backward short leg! Ball drops in no man’s land. Siraj replaces Bumrah. Bumrah no doubt being kept fresh for the new ball. Could Siraj get the old ball to reverse like he had in the 1st innings? Some excitable Indian fielders at the moment, this could turn out to be a test of Rahane’s captaincy if morning does show the day today.

There’s an edge! The first chance for India. Cummins nicks through off Bumrah, the ball lands just short of Pujara at slip. The first 15 minutes have seen not too much dramatic stuff happening. India’s emotion needs to be layered with patience today, tweets Harsha Bhogle.

Some quick running between the wicket between Green and Cummins to start off the day for Australia. India bowl Ashwin from the other end. Umesh’s injury has depleted the bowling attack for the rest of the match. Given India’s bad history with tails, the lack of a 5th bowler could come to bite them if this partnership frustrates for long today. AUS lead by 5 runs

Cummins and Green have entered the arena. As have the 11 Indians. As expected, it is Bumrah who will bowl the first over of the day. There’s a single off the first ball. AUS lead by 3

‘I love the smell of napalm in the morning,’ a certain wise man said many years ago. For fans of Indian cricket tuning into watch Test matches in Australia though, the ultimate prize is on offer today – the scent of victory. Once India break through the Cummins-Green partnership, the hosts are down to their bowlers. So, expect Bumrah to be running up with his tail up and the batsmen trying to stick on for dear life when play begins.

Day 4 to begin in around 20 more minutes

Still feel the hundred at Lord’s is my best, says Ajinkya Rahane

Champagne on ice: India bowlers put them in touching distance of a famous win

Hello and welcome to our live coverage of Day 4 of the Boxing Day Test, where India are firmly on the front foot. Australia have a slender lead of 2 runs with their score on 133/6 in the second innings. Pat Cummins and Cameron Green put up a dogged resistance till the end of day yesterday. If they can bat out the opening hour today, India will start to worry and Australia will start to believe, but at the moment, Rahane looks likely to maintain his flawless international captaincy record.

Play begins at 5 am IST.