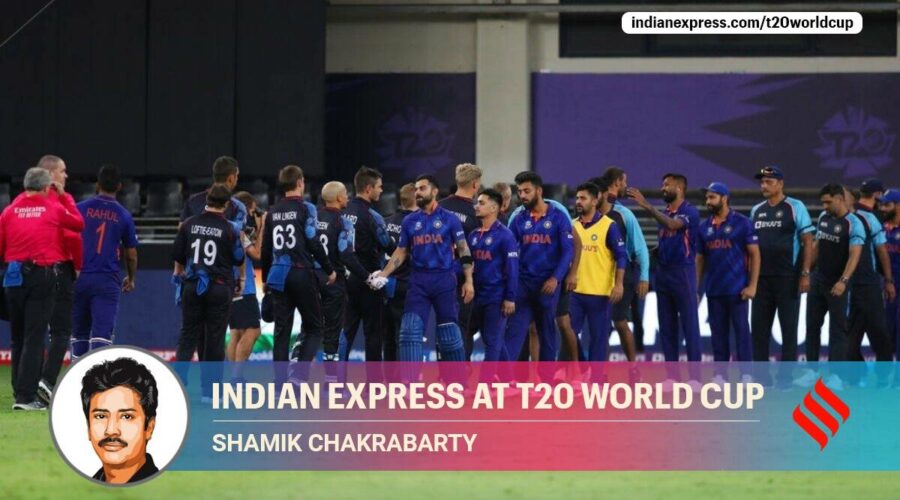 From the stadium atmosphere to the players’ body language, it was a fare-thee-well fixture for India. The loop in Ravichandran Ashwin’s delivery made the ball hang in the air a little more. Zane Green, not used to such level of wizardry, came forward as if in a trance. The ball dipped, spun like a perfect off-break to go past the bat and hit the stumps. Ashwin has done this time and again to batsmen far superior to Green. Ironically, India had ignored his quality for the first two matches of the T20 World Cup – against Pakistan and New Zealand.

From the stadium atmosphere to the players’ body language, it was a fare-thee-well fixture for India. Playing both Jasprit Bumrah and Mohammed Shami probably wasn’t in sync with the team’s physical and mental fatigue complaints. At least Rahul Chahar got a game and showed why his selection ahead of Yuzvendra Chahal for the T20 World Cup was a mistake, his line and length going awry against an Associate nation. The game started in front of virtually empty stands and ended amid a turnout of about 5,000. For India, it was about going through the motions. After restricting Namibia to 132/8, a facile nine-wicket victory was achieved with 28 balls to spare.

In the process, Rohit Sharma scored his second half-century of the tournament and became the second Indian to go past 3,000 T20I runs after Virat Kohli. The outgoing captain and the captain-designate are India’s batting royalty. But both would like to forget this T20 World Cup.

Those who cared to turn up for this game were witness to Ashwin’s spin masterclass. Knowing that he would have a complete upper hand against the Namibia batsmen, he teased them with loop and flight. Jan Nicol Loftie-Eaton went for a cut to a delivery that wasn’t short enough. The loop fooled the batsman. The extra bounce undid him, resulting in a catch to Rohit.

Gerhard Erasmus was taken care of by a faster one that skidded off the surface. Once again, an attempted cut wasn’t the right shot to play as Rishabh Pant pouched the catch. In the end, Ashwin’s figures read: 4-0-20-3. Hopefully, India under a new captaincy and coaching dispensation in white-ball cricket would use the master off-spinner a lot more.

Namibia put on 33 runs for the first wicket. But the game changed as soon as Ravindra Jadeja was brought into the attack. Before that, the excellent Jasprit Bumrah had removed Michael van Lingen with a rising delivery. The bowler didn’t care to celebrate.

The pitch had a hint of turn and Jadeja was always going to impose himself on the opposition batsmen. He bowled flat, but Craig Williams charged down the track to be beaten by the turn. Pant had an easy stumping.

The facileness of this contest had a trickle-down effect. A legendary former cricketer took time off for a friendly conversation, recounting events from the past and raising a question about why India needs a batting coach in the new set-up when Rahul Dravid is the head coach.

Out in the middle, Jadeja dismantled Stephan Baard with an arm-ball and finished with 3/16 to earn another Man-of-the-Match award. A couple of leaky overs towards the end made Namibia’s score respectable. But it was Rohit’s night, from the bigger responsibility that lies ahead to surviving three mishits on the bounce and a dropped catch, as he scored 56 off 37 balls.

Some of his shots, though, were mesmerising; like when he stepped out to Bernard Scholtz, failed to get to the pitch of the ball, but leaned into his lofted drive to send it for a six. All the while, KL Rahul was watching from the other end. He switched gears after Rohit’s dismissal, reaching his fifty off 35 balls and remaining unbeaten on 54 – three half-centuries on the spin to end the tournament.

Spectators would have liked to see Kohli walking out to bat on the last day of his T20I captaincy. Suryakumar Yadav was promoted instead. The gradual transition of India’s white-ball squad is expected to begin from the home series against New Zealand, with an eye to the T20 World Cup in Australia next year. Yadav is likely to be an important part of the team going ahead. He made 25 not out off 19 deliveries.

“I know we haven’t gone far in this World Cup, but we have had some good results in T20s and enjoyed playing together. It’s a game of margins, T20 cricket,” Kohli said at the post-match presentation, adding that it was the right time for him to look after his workload.

As for Namibia, not only did they give a good account of themselves here, they also secured automatic qualification for the next T20 World Cup, a year down the line.