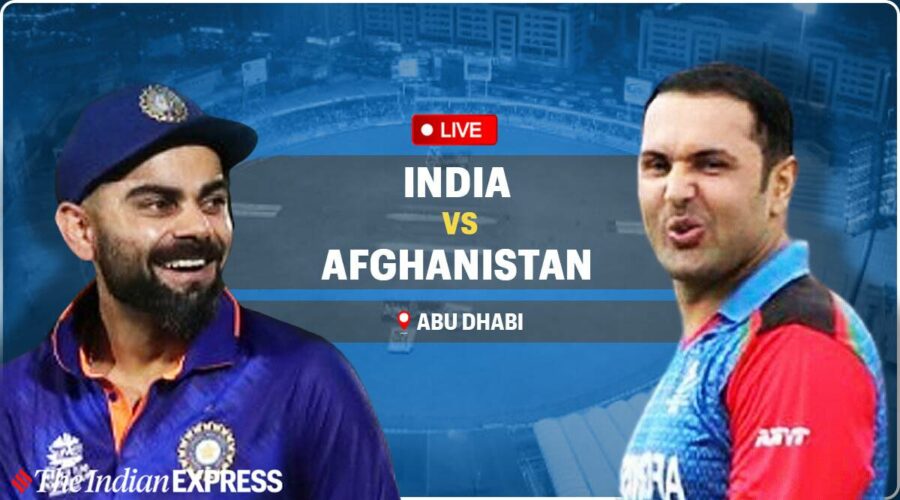 India vs Afghanistan LIVE Cricket Score, T20 World Cup 2021: India will be hoping to bring their floundering campaign back on track on Wednesday. 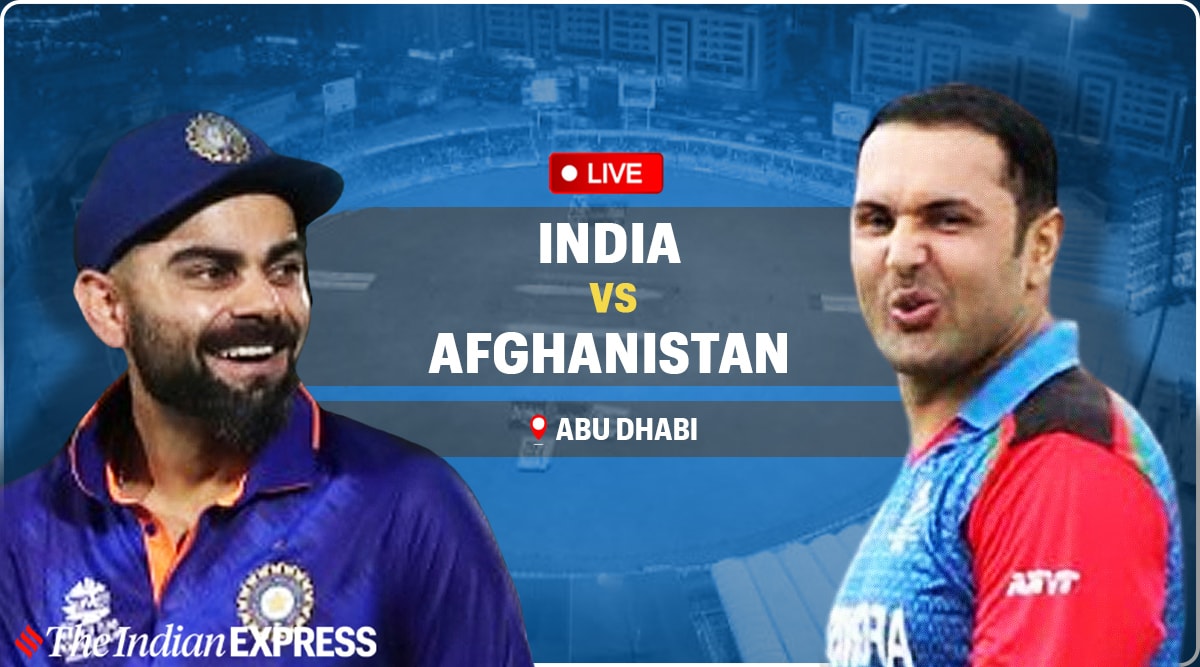 India vs Afghanistan LIVE Cricket Score: Afghanistan opted to bowl against India in an all-important Super 12 game of the ICC T20 World Cup here on Wednesday. Ravichandran Ashwin will play his first white ball game in four years in place of injured Varun Chakravarthy, who has a left-calf issue while Suryakumar Yadav, having recovered from back spasm, is back in pace of Ishan Kishan.

India will be hoping to bring their floundering campaign back on track after two crushing defeats against Pakistan and New Zealand when it takes on a feisty Afghanistan. Against Afghanistan, the middle-overs, during which Rashid Khan operates, will be crucial. Afghanistan have expectedly won their two games against Scotland and Namibia and were in the contest against Pakistan for the better part before Asif Ali took the game away with four sixes in one over.

Still taking baby steps as an international cricketer, Afghanistan pacer Naveen-ul-Haq’s internet footprints aren’t too overwhelming. But in the short period, he has caught the attention of clickbaiters because of his “viral video” launch last year. In the clip that allegedly “killed the internet” Naveen was seen giving a sheepish look and Pakistan legend Shahid Afridi had that look – one that can make even battle-hardened veterans quiver. In a Sri Lanka T20 league game, Naveen had a running battle with Mohammad Amir, who was Afridi’s team mate. At the end of the game while the players performed the “meet and greet” ritual, Afridi gave Naveen a piece of his mind. Later, when the Pathan’s anger had subsided, he would tweet that juniors should respect seniors. Naveen seems to have learnt his lesson. The other day he was all smiles during his intense battle with Shoaib Malik. And today against India, he was bowling to his hero Rohit Sharma. He would get pilloried in his first two overs, Rohit would hit him for 3 fours and a six. After his second over, where he conceded 16 runs, Naveen would stare at the Abu Dhabi turf and walk to his fielding position.

Naveen returns to the attack. He has been expensive thus far. Painful blow to Rohit. Rohit just slaps the next ball away to the left of the sweeper, who has a lot of ground to make up and ends up fumbling the ball into the rope on the dive. And that brings up Rohit’s fifty. And a 6 by Rahul. 100 comes up. And another 4 to follow. They are just eating Naveen alive in this match. IND 107/0 after 12 overs.

Shot. Gulbadin wants to deny him the room to play but Rohit makes plenty of room, and opens his bat face to dab it very fine, bisecting the keeper and short third. A great four. A relatively decent over nonetheless. 6 off it. IND 91/0 after 11 overs.

The 10th over will be bowled by Rashid. And he is hit for a four straightaway by Rahul. It is perfectly placed, finding the backward square boundary. 11 off this over. IND 85/0 after 10 overs. We gop for drinks now.

Ashraf to bowl the 9th over and he is driven for a 4 by Rahul in the 3rd ball. India will be looking to convert it into an 8 or 9 run over. And 9 off the over. Decent over from India’s perspective. IND 74/0 after 9 overs.

8th over starts. The last over went for just 6 runs. Now Rashid Khan has been brought on. First bowler today to get a slip. 5 off the first five deliveries. Last ball also went for one. Good couple of overs from Afghanistan’s perspective. IND 65/0 after 8 overs.

Both India and Afghanistan ditched the knee in their group league match in Abu Dhabi on Wednesday. India didn’t perform the gesture in their last match against New Zealand also, although the Kiwis took the knee.

In terms of taking the knee, India did it before the start of their first match against Pakistan. It came on the heels of the International Cricket Council giving every team at the T20 World Cup the opportunity to show solidarity with the Black Lives Matter (BLM) movement and send a message against any form of racial discrimination. Accordingly, Cricket South Africa made it mandatory for their players to take the knee before every game and after his initial reluctance to do so, Quinton de Kock, too, followed his cricket board’s directive.

India, meanwhile, asserted that their stance against racism and discrimination remained unshakable. “The Indian cricket team took a knee during their opening game of the (T20) World Cup and its stance against racism was well registered and documented. There’s no scope for racism or any form of discriminatory behaviour in sport,” a source close to the team told this paper on Sunday.

The last over of the powerplay starts. Hamid to bowl. Can he repeat what he did in his last over? Subdued appeal for lbw before a late decision to review. Rohit was down on one knee trying to ramp a yorker. He was struck in front of leg stump, on his back boot. And Rohit survives. Afghanistan lose a review. Just 1 off the over. India 53/0 after powerplay ends.

Penultimate over before the powerplay. Naveen to bowl. And a no ball to start. Just one off the free hit though. This is India’s best start to the powerplay in this tournament. Aaaaaaand another four to follow. Rohit just sets up deep in the crease and chucks his hands at it to slash past point. Afghanistan are leaking runs at the moment. And it’s a 6 in the 5th ball. Sweetly struck and it goes over the ropes. And a 4 to end the innings. Naveen is getting served. 50 up for India. IND 52/0 after 5 overs.

Hamid in to bowl the 4th over. Can he save some runs and check these Indian batters? Makes a good start. Just 3 off the first four balls. Well, he did whatever he was brought on for. 5 off this over. IND 35/0 after 4 overs.

Naveen to bowl the 3rd over. One dot and 2 singles to start the first 3 balls. And the 5th ball is sent straight to the boundary. In the gap. The change of pace does not help. Rohit nails the pull over midwicket. 7 off the over. IND 30/0 after 3 overs.

Oh well placed. Pre-meditated lap sweep from Rohit. He was down early, the ball was at a length outside off. He gets on one knee and angles it fine. Looks like Hamid Hassan was the man at short fine. The ball was away from him quickly. Sharafuddin is having a pretty rough time. And that one is hit for a massive 6. Rahul nails it. Clears the front leg and swings this handsomely over mid-on and about 83 metres deep. And it ends with a four. Just the start India wanted. IND 23/0 after 2 overs.

Rahul and Rohit are at the crease. Rahul is on strike. Nabi will open the attack. And Rohit ends with a four in the first over. IND 7/0 after 1 over.

The coin goes up. Afghanistan has won the toss and sent India to bat first.

– With an average score of 51, Afghanistan have been the best batting side in PowerPlays during this Super 12 phase.

– India have just hit three boundaries in 16 overs of spin this tournament and scored their runs at a rate of 4.75- 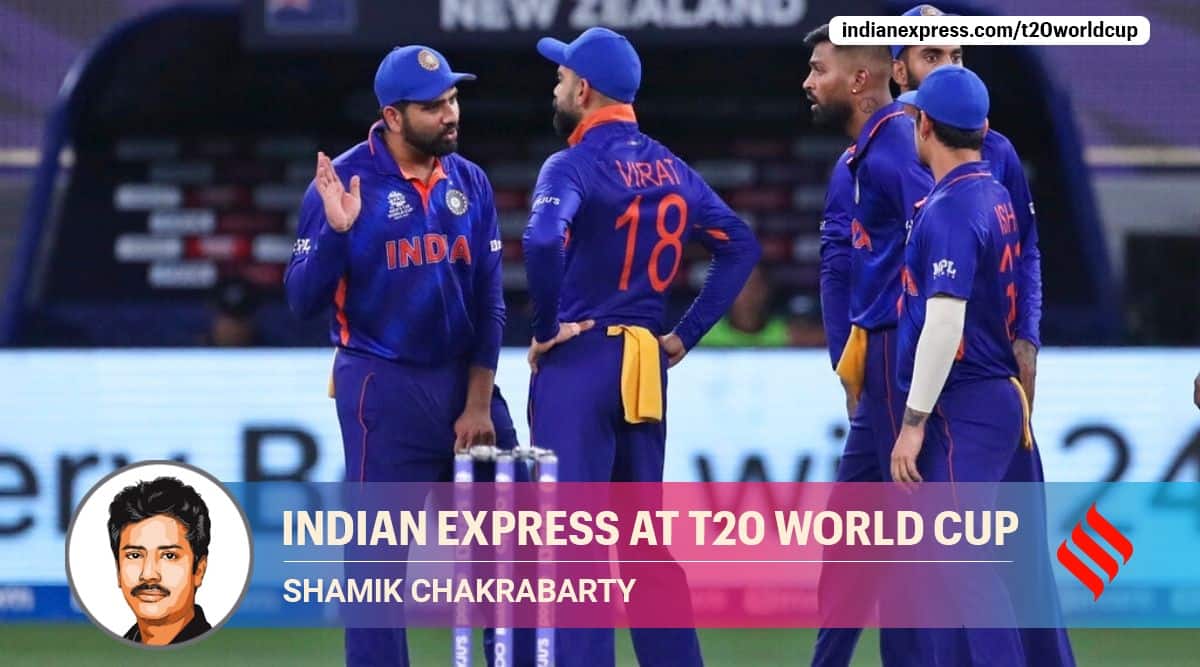 How does a team bounce back from two morale-crushing defeats when its cricket is not brave enough, by Virat Kohli’s own admission? How does a team return to winning ways when its bowling unit has taken only two wickets in two matches? How does a team motivate itself knowing that its fate at the T20 World Cup is no longer in its own hands? Inclusion of fresh faces could help; some new players coming into the playing eleven against Afghanistan without carrying the excess baggage of back-to-back losses. Then again, it’s a double-edged sword. Axing is easy, the message it would carry might not be palatable. (READ FULL STORY)