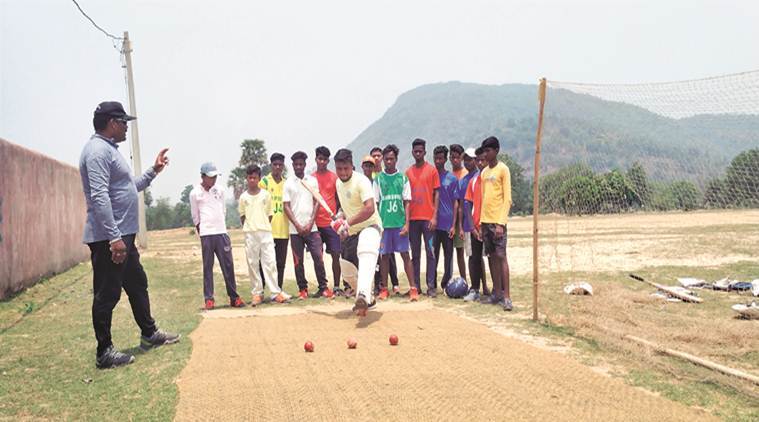 But then, for the cricketers of Kenduataand in East Tundi block, all Santhal tribals, cricket has been a journey in itself — from an “aimless and wayward life” to one of “purpose” and “hope”. ON WEDNESDAY, India take on South Africa in their first match of this World Cup in Southampton. It will be the first step of a journey that a billion fans hope will end with the trophy at Lord’s in London on July 14. And if that happens, among those celebrating will be an entire village located thousands of kilometres to the east — in Jharkhand’s Dhanbad district.

But then, for the cricketers of Kenduataand in East Tundi block, all Santhal tribals, cricket has been a journey in itself — from an “aimless and wayward life” to one of “purpose” and “hope”.

In Kenduataand, the first step was taken seven years ago by Sipon Tudu, a 24-year-old M S Dhoni fan who “cycled for an hour” and then hopped on to a truck carrying sand to reach the Dhanbad Sports Academy run by local coach Umesh Srivastava.
“I was asked to take a trial and then admitted to the academy as an allrounder for a fee of Rs 250 a month. But within three months, I was struggling. My family of seven has five bighas of land, and it’s just enough for our survival. My elder brother works as a daily wage labourer,” says Tudu, who studied up to Class 12 and works on his farm land when not playing cricket.

“When Sipon told me about his village, I asked him to bring everyone along. I told him I would not charge any fee. But even sparing Rs 50 per day for the bus fare was tough for them and they were on the verge of quitting,” says Srivastava, the coach.

“For me, it was my entire childhood in rewind mode. I was so passionate about cricket but could not pursue the game professionally because of a middle-class mentality at home. We used to be beaten up for playing cricket. Now, there were these youngsters who cycled for hours and travelled on trucks to reach my academy. I promised myself and Kenduataand villagers that their dreams won’t be crushed,” says Srivastava.

Soon, the coach visited the village, met the elders and pitched the idea of getting the youngsters to play. “There was a ground where people used to play football. However, after a Maoist attack in the year 2000 during a football match, there weren’t many takers… there was much work to do,” says Srivastava, referring to the killing of Bihar Higher Education Minister Dr Saba Ahmed in October 2000, before Jharkhand was officially declared a separate state.

“The families were sceptical but after seeing the youngsters’ enthusiasm, they relented. In the next few days, I handed them a surplus cricket mat, nets, bats, pads and other equipment to Tudu and his team. I would visit the village once a week to train them. A few sports shops in Dhanbad gave me cricketing gear at cost price… Students started coming in and an environment was created,” says Srivastava.

“Earlier, some of our youngsters used to waste their time drinking hadiya (a local rice beer)… many were jobless. Since we started playing cricket, they wait for our annual tournament to happen. Now, many hope that some of us would make it to the district cricket team,” says Tudu.

Apart from Tudu, the first batch from the village included Rajesh Murmu, once a batsman and now a teacher; and, Budhan Murmu, an aspiring batsman whose family owns a ration shop. Then there’s Anil Manjhi, who made it to a department team in Bharat Coking Coal Limited (BCCL) — he works as a mechanical fitter in the company.

The tribal cricketers admit that they are still a long way away from where they want to be. Srivastava is now able to make it “only once or twice a month”, there is “not enough gear”, and practice is conducted on a weathered mat with used leather balls and old bats. “There is a dire need of funding,” says the Dhanbad coach.

But no one’s giving up. Today, over 20 cricketers, ranging from 10 to 30 years of age, gear up every day in Kenduataand under the scorching summer sun. They practise from Thursday to Sunday for three hours every day starting 6.30 am. The village has also become the venue of a “premier league”, with four teams competing over a month every year. Youngsters from neighbouring villages have also started trickling in.

“Whenever matches are organised, it looks like a fair and the entire village is involved. The boys have got a purpose in life,” says Durga Tudu, 70, Sipon’s father. He remains apprehensive about the road ahead, though. “Jab iss gaon se koi Dhoni banega, tab dekhenge (When someone from this village becomes like Dhoni, then we will see).”

But Sipon Tudu remains hopeful. “A few girls have now started learning the game. Even my seven-year-old niece has started practising with a custom-made bat and a leather ball.”

06/02/2019 Sport Comments Off on In World Cup season, a story of cricket and hope from a tribal village in Jharkhand
India