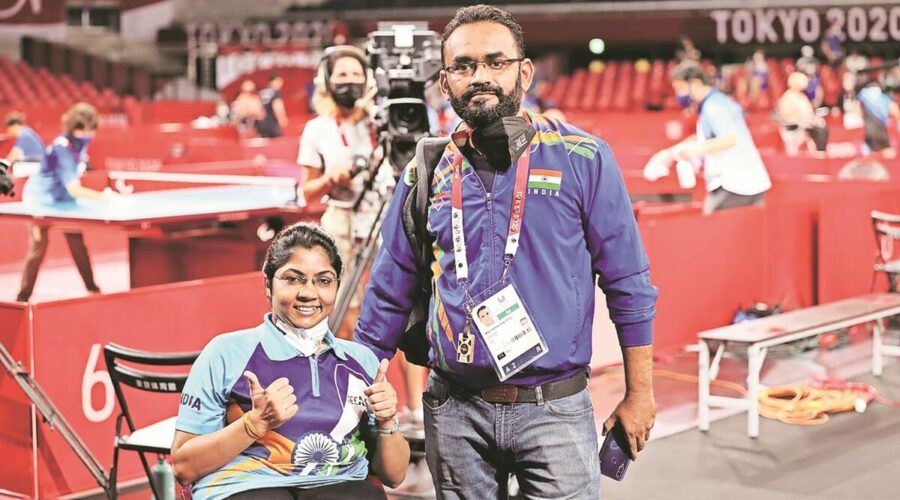 Thirty-four-year-old Bhavina, on wheelchair, beat World No. 3 China’s Miao Zhang at Tokyo to assure India a historic silver medal and a very good shot at the gold Sunday. Afflicted with polio as a toddler and using crutches ever since, Bhavina Patel, after her schooling in Sundhiya, a village of 15,000 in Gujarat’s Mehsana district, moved to Ahmedabad to pursue an ITI computer science course. There she would get hooked to table tennis, but the pursuit of her new-found passion wasn’t easy. Just to reach the venue, Bhavina would need to change two buses, get into a couple of shared auto-rickshaws and cover the last mile dodging Ahmedabad’s notorious traffic while on her crutches. Once in a while she would have for company a one-time state-level under-19 cricketer — her reliable friend then and a supportive husband now.

On Saturday, Nikul Patel, 36, had reasons to revisit those days. He says it was his wife’s drive to stand on her feet and jump over obstacles that made her the first Indian to enter the table tennis Paralympics final.

Thirty-four-year-old Bhavina, on wheelchair, beat World No. 3 China’s Miao Zhang at Tokyo to assure India a historic silver medal and a very good shot at the gold Sunday.

Nikul says Bhavina, from an early age, wanted to do it all. She strived to be independent and had academic goals. “She is a Central government employee with the Employees’ State Insurance Corporation and is very diligent in whatever she does. It was the same with table tennis. Ask anyone who is familiar with Ahmedabad, they will tell you how difficult it must have been for her to practise table tennis. From Bapunagar where she lived, she would go to Naroda Patiya, then to Juna Vadaj, Ghatlodia and finally to the Vastrapur Blind Association,” he says while breathlessly drawing the picture of his wife’s Old to New City daily route, which back in the day would have been mostly red on Google Maps.

Bhavina has moved from shared autos to aircraft, but travel remains extensive and arduous. “We have travelled to about 25-30 countries. At times, she travels on her own. Europe is very convenient for especially abled people but it’s not the same everywhere,” says the cricketer-turned-import-export businessman.

He recalls Bhavina’s traumatic experience at an event in China. “It was very cold there and she had very high fever. She had to manoeuvre her wheelchair in snow for close to a kilometre and a half,” says Nikul, who gave up on his cricket career frustrated by lack of chances and the responsibility of running the family business.

Before the Paralympics, with the pandemic peaking in Europe, the two were together in Spain for a tournament that was vital for Bhavina’s qualification for Tokyo. Having missed the Rio Paralympics by a whisker because of lack of points, the two had decided that they couldn’t take any chances. Both sat and planned their schedule perfectly.

“We knew how many points we needed to gather at what tournaments we needed to play. We didn’t want to take any chances. We wanted the IOC’s invitation letter which said we had made it for Tokyo. Spain was a risk but we said whatever happens we will see. The Corona fear was there but we took our chance,” he says.

With only partial funding, the Patels have to regularly dig deep in their bank accounts to fund their trips. There is also the cost of the expensive rubbers and ply. “On an average, we end up spending close to Rs 12 to 13 lakhs annually. People think table tennis is cheap. But a quality bat can cost close to Rs 70,000,” he says.

The cricketer, who was shortlisted for the India team for the 2002 under-19 cricket World Cup, is well aware that to be among the best nothing can be left to chance. Nikul says that their two-storeyed home has complete wheel-chair access and one of the four rooms has a TT table.

“So for six months during the pandemic, Bhavina trained at home. After a point, we would ask the coach and other wheelchair players to come home and play against her,” he says. With one-fourth of the Patel household occupied by TT, there are days when there are space constraints. “When we have guests at home, we fold the table and sleep on the floor. Ours isn’t a very big house but TT has been allocated enough space.”

Bhavina, besides table tennis, is an ardent music lover and reputed cook. “If you have the bhajiyas she fries, you wouldn’t like it anywhere else,” chuckles Nikul to make a point.

The chat is cut short by a chorus of telephone rings in the background. Nikul puts one phone on hold and can be heard telling the caller that Bhavina cannot be connected to the news channel studio as she hadn’t slept. He comes on the line again to inform that local channels have reached Bhavina’s village.

“This is what a medal does. Before that, even if a Paralympian was living two houses away you wouldn’t be aware. But our Subh Laabh Society is different. They all came to say goodbye to her and wish her luck.” As he speaks, the telephone chorus in the background picks up again. The fame of India’s first ever table tennis Paralympics medallist has gone beyond the two houses.