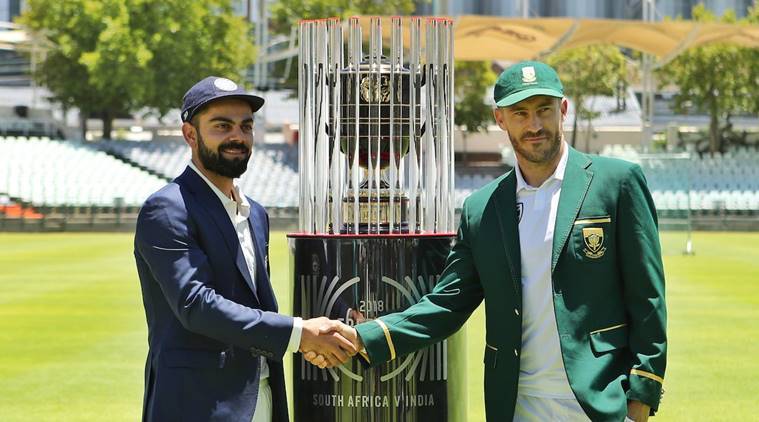 The ten captains of the World Cup 2019 teams gathered to address a joint press conference in London on Thursday, one week before the commencement of cricket's showpiece event. One of the questions that brought forth interesting answers from the captains was asked by a young boy, who asked all the captains to choose a player from opposition teams who they would have liked to have had in their team.

Virat Kohli chose Faf du Plessis, a senior player who could have solved the much-publicized No. 4 problem for India. Before Kohli’s answer, Finch jokingly reminded him that he would not be able to pick AB de Villiers, his Royal Challengers Bangalore teammate. Kohli replied by saying that he would have liked to choose De Villiers but would be happy with his successor to the South Africa captaincy.

Morgan and Holder said they were happy with their teams, while new Afghanistan captain Naib said his choice would depend on the conditions.

Mortaza picked Kohli, while Jasprit Bumrah was one three players named by Du Plessis, the others being Pat Cummins and Rashid Khan. Rashid Khan also got Williamson’s vote, who he said “would be welcome in my team anytime.” Finch chose Kagiso Rabada, Karunaratne chose Ben Stokes and Sarfraz chose Jos Buttler.

Speaking on the prediction that the upcoming World Cup is going to see a run fest and several batting records broken, Kohli said, “England seem to be obsessed with getting to 500 before anyone else.

“It could be high-scoring, but I think 260, 270 will be as difficult to get in the World Cup as 360, 370. I see 250 being defended, too. I don’t see many high-scoring games happening in the latter half of the tournament. That’s the kind of pressure the World Cup brings.”

Agreeing that bowling units will have a big job at hand, Du Plessis said, “Not all teams are going to be in a great position. Teams that have to get a result (to make the semifinals) will be under the most pressure. It won’t be gung-ho from ball one.”

“The teams toward the end of the tournament will have done really well with the ball, and have the ability to take wickets even on flat pitches.”

Finch said, “If you see the last couple of years, trajectory of scores has been going up and up in England. We have been at the receiving end of the highest one.”

Asked to name World Cup favourites, Finch said, “England have been in great form for a number of years and you have to say they are definitely favourites,” Finch said.

Eoin Morgan said there is justification to the tag of favourites England are going into the World Cup with but that it does not guarantee a safe passage to the knockout phase. “Nobody is head and shoulders above everyone else. It is going to be very difficult. These are the 10 best teams in the world, so it is going to be extraordinarily competitive.”

“Expectations do not come out of thin air. We have scored some quite high scores, especially at home, and that has brought a lot of confidence.

“The World Cup is a different kettle of fish. Everything we have done does contribute, but you still have to produce the goods.”

Speaking about the India vs Pakistan clash, Kohli said, “Look India Pakistan is always a very very anticipated match but we keep saying again and again. If you ask the players it is very different from how the fans look at the game. Yes you feel the anticipation and excitement of the fans when you enter the stadium but as soon as you step on the field, it is very professional.”

“My answer is the same. I don’t need to add,” said Sarfraz.

05/23/2019 Sport Comments Off on ICC World Cup 2019: Captains pick opposition players they would have liked to have
India