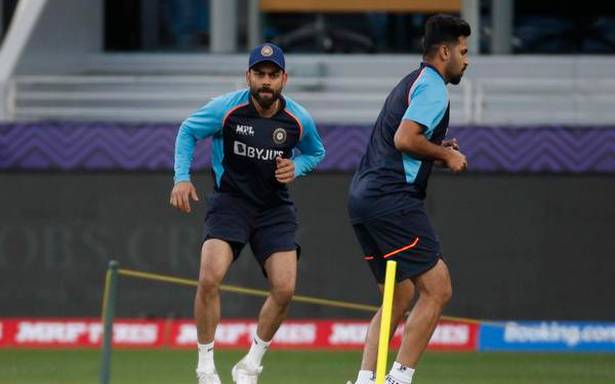 Both India and Namibia made one change from their previous match playing XI.

India captain Virat Kohli opted to bowl in their final Super 12 match of the T20 World Cup against Namibia here on Monday.

Both teams made one change from their previous match playing XI.

For India, Rahul Chahar replaced Varun Chakravarthy while Jan Frylinck came in for Karl Birkenstock in the Namibian team.

This match is the last for Virat Kohli as India captain in T20 Internationals while Ravi Shastri is donning the head coach’s hat for the last time.

“We’ll bowl first again. The tosses have been a big factor here so when I’ve won a couple, it’s worth doing what we wanted to do from the start,” Kohli said.

“It’s been an honour for me, I was given the opportunity and I tried to do my best. But it’s also time to create some space and move forward.

“I’ve been immensely proud of how the team has played. Now I think it’s time for the next lot to stake this team forward. Obviously Rohit is here and he’s overlooking things for a while now.” Rohit is expected to take over from Kohli in the shortest format.

11/12/2021 Sport Comments Off on ICC Twenty20 World Cup | In his last match as captain, Virat Kohli opts to bowl against Namibia
India