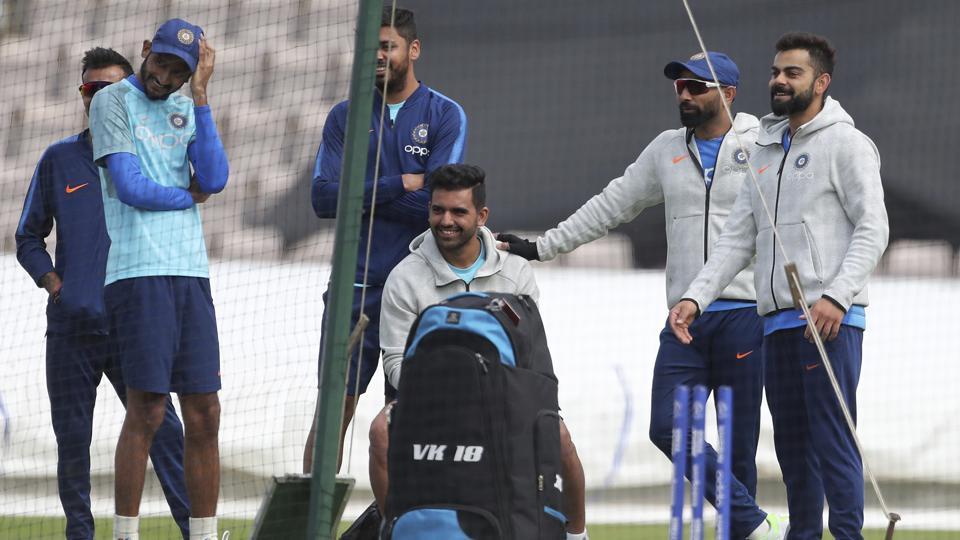 The fickle English weather has left the Indian team fretting over its bowling combination for the World Cup opener against South Africa. The Ageas Bowl pitch in Southampton is expected to be flat and South African batsmen’s weakness against the slow bowlers would make Kuldeep Yadav and Yuzvendra Chahal first XI starters in the lung opener.

However, a spell of rain on Monday and forecast of cloudy weather and shower on Wednesday has brought Bhuvneshwar Kumar in the equation and the team may thrust three specialist speedsters into action.

In that case, the team will have to leave out either Yadav or Chahal and also decide which all-rounder between Kedar Jadhav and Vijay Shankar to field.

South Africa’s record against the two wrist spinners during India’s last away tour was below-par with most of them unable to pick them off their wrists.

On that 2018 tour of South Africa, Kuldeep had 17 wickets from six games while Chahal had one less from equal number of matches.

Virat Kohli’s propensity to go for the kill is precisely the reason why he would like to prefer attacking options like ‘Kul-Cha’ as they are fondly known.

Whatever little layer of grass was there has been shaved off and the pitch resembles a typical sub-continental 22-yard strip where a lot of lateral movement can’t be expected.

The grounds in England, equipped with superb drainage system, dry out quickly and unless there is persistent rain there is no possibility of underlying moisture, which could then help the ball to jag around even in sunny conditions.

The forecast on Wednesday shows a maximum temperature of 17 degrees with partly cloudy sky and chance of rainfall.

If the choice comes between Kuldeep and Chahal, the left-arm chinaman might get the preference over the wiry Haryana leggie despite former’s poor form in recent times.

Ravindra Jadeja had two good warm-up games but he is seen more as a restrictive option, who can be more effective against England or Pakistan.

However the other problem will be the choice between fit-again Kedar Jadhav and Vijay Shankar.

Shankar had two bad warm-up games but that will count for little considering the ability he has shown with the bat.

However Kedar Jadhav’s handy off-breaks along with his cheeky batting at No 5 or 6, makes him a better choice while chasing a big score.

But in case, the conditions are overcast, then Shankar could share the fifth bowler’s role along with Hardik Pandya with Jasprit Bumrah, Mohammed Shami, Kuldeep and Chahal taking care of the other 40 overs.