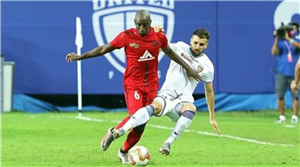 Khassa Camara has beeen a central figure in the Northeast United starting lineup as well as in the ISL this year. Four months ago, Mauritian international footballer Khassa Camara was holidaying with his family in Paris, when he got a call from his agent. How would he like to move to India and play in the ISL, his agent asked him. The words did not mean much to Camara. Neither did they mean much to his family members. He put a call through to former PSG footballer Bernard Mendy, who had played the last three years of his career in the ISL. Then, just to be sure, he put another call through to Panagiotis Triadis, a former clubmate of his who had also played in the ISL.

“I had to make my choice fast,” Camara told indianexpress.com in an exclusive chat. “Both Bernard Mendy and Triadis told me many good things about India in general as well as the ISL. Northeast United was the club who had come in for me, so that choice was pretty easy once I made up my mind I would move to India,” he said.

Camara needed time to get used to training in the heat and humidity of Goa’s Candolim, a far cry from Crete in Greece, where he is more used to playing his football.

“Initially it was hard to handle the fact that I was so far from my family. But here I have found another family, so that helped a lot in helping me get adjusted to my new life,” he said.

Once the season started, it was soon clear that Camara would be a central figure, not just in the Northeast United starting lineup, but also in the league. In the opening match, title-favourites Mumbai City FC were put to the sword by Northeast United, with the crucial moment being a red card given to Ahmed Jahouh for a challenge on Camara. The midfield battle had been won by the Mauritian enforcer.

However, points have been harder to come by for the Highlanders since their opening day victory. They have managed just one more win since then and are languishing in the bottom half of the table.

“It’s true we have had had too many draws. We are definitely never okay with draws. We play all the games to win and to fight. We just have to focus on the small details that can make all the difference,” said Camara.

Northeast United manager Gerard Nus, speaking at a post-match press conference last month, called Camara one of the best players in the ISL. Statistics support Nus’s claim – the central midfielder has been one of the most prolific in terms of tackles and interceptions so far, not to mention the occasional firebolt long-ranger.

“The coach knows my qualities very well, he knows all the different ways I can contribute to the team. I can play as a Number 8, but my best position is more like a Number 6, which I get to play here,” said Camara, who has always wanted to be the “hub of the team”.

“When I was 13-14, my trainer placed me in the defensive midfield, and I didn’t move. I liked it, because that’s where you hit the most ball,” added the Mauritian, who has now spent half his life cutting off supply lines of attacks, first in France, then in Greece and now in India.

Now 28, and operating at the prime of his capabilities, how long does Camara see his stay in India extending?

“I like the league and the country. Why not continue for another year, or even more years? I have been very impressed by the professionalism of Indian football. I think European players will enjoy playing here,” he said.

01/12/2021 Sport Comments Off on From Crete to Candolim: Khassa Camara finds a home in the Highlands
TV & Movies