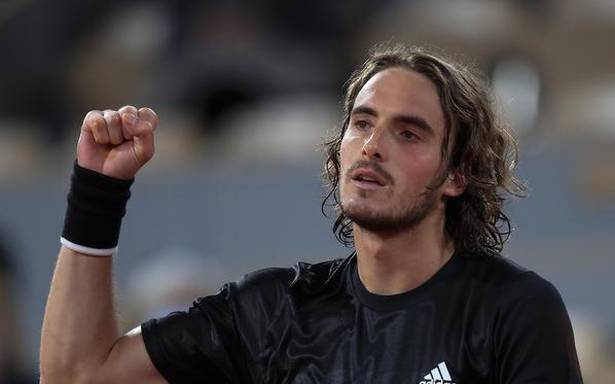 Rublev hits back to down Fucsovics; Kvitova eases through

Top seed Novak Djokovic passed his first real test at this year’s French Open with flying colours as he went past Russia’s Karen Khachanov 6-4, 6-3, 6-3 on Monday to reach the quarterfinals for the 14th time.

It was the Serb’s fourth successive straight-sets victory in his latest quest for a second Roland Garros title.

Earlier, Stefanos Tsitsipas reached the last eight of a Grand Slam for the second time as he brushed aside Grigor Dimitrov 6-3, 7-6(9), 6-2.

The World No. 12 looked in big trouble when he trailed by a set and 5-2 but rallied to end the run of Fucsovics who had shocked Rublev’s compatriot Daniil Medvedev in the first round.

Rublev is one of the in-form players of the year and his win was his 29th in 35 Tour-level matches. Fucsovics, who was trying to become the first Hungarian man to reach a Slam quarterfinal for 39 years, will rue a missed opportunity.

In the women’s section, Czech left-hander Petra Kvitova reached the quarterfinals for the first time in eight years as she overpowered China’s Zhang Shuai 6-2, 6-4. to set up a meeting with unseeded German Laura Siegemund. Siegemund beat Paula Badosa 7-5, 6-2.

On yet another chilly day in the French capital, seventh seed Kvitova’s superior firepower proved decisive as she posted her fourth successive straight-sets victory.

With so many big names already out, twice Wimbledon champion Kvitova will sense a golden title opportunity as she heads into a match-up against unseeded German Laura Siegemund.

Siegemund came through a tight opening set before cruising past Spaniard Paula Badosa 7-5, 6-2 to reach her maiden Slam quarterfinal.

Both players struggled on serve in the opening set of their see-sawing fourth-round meeting on Court Simonne Mathieu, before Siegemund switched gears at 5-5 to claim the decisive break and take the early advantage in the contest.

In boys’ singles, India’s Dev Javia exited in the first round after losing to local hope Antoine Ghibaudo 6-4, 3-6, 6-3 in one hour, 45 minutes.