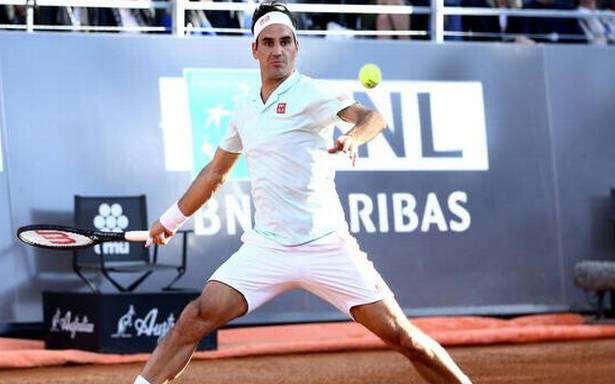 Federer is returning to Roland Garros for the first time since 2015.

Novak Djokovic can become only the second man in history to have twice held all four Grand Slam titles at the same time with victory at the French Open.

However, a returning Roger Federer and rejuvenated Rafael Nadal will once again stand in his way.

World number one Djokovic completed his first private stranglehold of all four Slams with victory at Roland Garros in 2016.

Having clinched the 2018 Wimbledon and US Open titles and then a seventh Australian Open crown in January this year, the Serb is tantalisingly close to another ‘Djoko Slam’.

Federer and Nadal, with 20 and 17 career Grand Slam titles each respectively, may be ahead of 15-time major winner Djokovic in total hauls.

However, they have never managed to hold all four of the sport’s greatest prizes at the same time.

Djokovic, who turned 32 on Wednesday, is playing down his potential date with destiny.

After losing to Nadal in the Italian Open final last weekend, the Serb was in no doubt that it was the Spaniard who would likely be celebrating a 12th Roland Garros title in a little over two weeks’ time.

"Nadal, number one favourite, without a doubt — then everyone else," he said.

However, he admits his Paris triumph of 2016 which gave him his first sweep, is fuelling his bid for more history.

“There is an extra motivation and incentive to win Roland Garros because of the opportunity to hold all four Slams, something I did three years ago, and that gives me obviously enough reason to believe I can do it again.”

Twelve months ago, such confidence would have appeared reckless when he was shocked by Italian journeyman Marco Cecchinato in the quarter-finals, a defeat which sent him crashing out of the top 20 for the first time in over a decade.

This time around he starts his campaign against Poland’s Hubert Hurkacz, the world number 43 with a potential quarterfinal against Germany’s Alexander Zverev who has still to get past the last eight at a Slam.

Federer is returning to Roland Garros for the first time since 2015 having turned his back on clay court tennis to focus on Wimbledon.

This year marks the 10th anniversary of his one and only Paris triumph and should the 37-year-old defy the odds and clinch the 2019 title he would become the oldest Grand Slam champion of all time.

However, Federer admits his hopes of seeing off Nadal and Djokovic are slim.

“I feel like I’m playing good tennis, but is it enough against the absolute top guys when it really comes to the crunch? I’m not sure if it’s in my racquet,” he said Friday.

The Swiss star faces Italy’s Lorenzo Sonego, ranked at 73 in the first round on Sunday and could meet Nadal in the semi-finals.

Nadal, whose record at Roland Garros stands at a staggering 11 titles and a win-loss record of 86-2, claimed a ninth Italian Open title and a record 34th Masters last week.

“I don’t care if I’m the favourite,” said Nadal who starts against German qualifier Yannick Hanfmann, the world 184 who has never won a Grand Slam match.

“I care about feeling well and playing well.”

Nadal’s three-set win over Djokovic in Rome was timely as it was his first title of 2019 and had followed three successive semi-final losses at Monte Carlo, Barcelona and Madrid.

The last two of those were against Dominic Thiem and Stefanos Tsitsipas, both of whom play with a one-handed backhand, just like Federer.

Thiem, the 2018 runner-up to Nadal at Roland Garros, has defeated the Spaniard four times on clay.

“There is a new wave coming through with the one-handed backhand that can counter some of Rafa’s spins and lefty play,” said Federer.