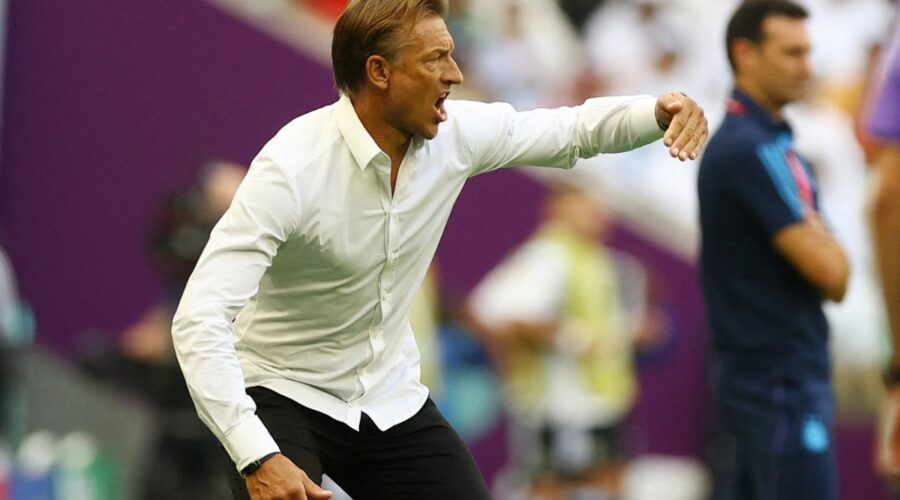 Saudi Arabia fans will long celebrate their team’s stunning victory over Argentina at the World Cup on Tuesday and their French coach Herve Renard could quickly become a national hero.

Saudi Arabia had never previously won their first match at a World Cup, suffering a humiliating 8-0 defeat by Germany in 2002 and a 5-0 loss to Russia in 2018.

They fell behind to an early Lionel Messi penalty against Argentina but inspired by a halftime team talk from Renard, fought back to secure a famous 2-1 win over the twice world champions.

The 54-year-old Renard began to make his name as a coach in 2012 when he led Zambia to the African Nations Cup title for the first time during his second spell in charge of the team.

He moved on to manage Ivory Coast and led them to the African crown in 2015 with a dramatic shootout win over Ghana before taking Morocco to the World Cup for the first time in 20 years.

After losing to Iran and Portugal in 2018, Morocco produced a superb display to draw 2-2 with Spain.

“When I decided to coach this team (Saudi Arabia) three years ago, I found all the support, we have a great federation president and also the Ministry of Sports,” Renard said after the victory over Argentina.

“When we met with Prince (Mohammed bin Salman, the Crown Prince), he did not put any pressure on us, and this is wonderful. Being pressured does not work every time.”

Renard is not only a fine technical coach but also a powerful motivator.

“We had a crazy coach who gave us instructions and motivated us strongly during halftime,” Saudi Arabia midfielder Abdel-Ilah al-Maliki told Al-Kass TV station after the win over Argentina.

“I swear to God I was crying and the coach motivated us and we wanted to start the match from the morning. I can’t describe what happened,” he added.

Renard has called on the Saudi fans for more support in the remaining Group C matches against Poland and Mexico.

“Argentina is the champion of the Copa America and had not lost in the last 36 games, but you know what happens when a small team plays as we are neighbours of Qatar,” Renard said.

“This contributed to the presence of a large number of our fans in the stadium. We had to think about it and think about the 35 million Saudis who waited for this match.”

Renard said he had stressed the importance of the game to his team.

“I told the players that life will stop in Saudi Arabia today, and everyone will wait for this match,” he said.

“The number of fans was large, but I hope it will be even larger.”

The team’s supporters were certainly impressed and will be able to celebrate further on Wednesday which has been declared a national holiday in Saudi Arabia.

“Historic victory, Argentina’s first defeat after 36 games. We will return in large numbers.” Saleh Al-Hamid, who travelled from Riyadh to Lusail by road, told Reuters outside Lusail Stadium.

11/22/2022 Sport Comments Off on FIFA WC: Who was behind the Saudi halftime resurgence?
India