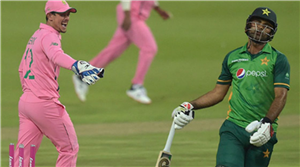 Fakhar Zaman was run out on 193 in the 2nd ODI vs South Africa on Sunday in dubious fashion. Quinton de Kock signaled to the bowler's end as Zaman ran back for a double, Zaman slowed his pace down and the throw was a direct hit at his end. Pakistan continue to question South Africa wicketkeeper’s ‘intentions’ in distracting Fakhar Zaman before running him out on 193 during the 2nd ODI, even as MCC weighed in on the ‘spirit of cricket’ debate surrounding the incident a day later on Monday.

Former Pakistan cricketer Waqar Younis pointed to De Kock’s “cheeky giggle” to suggest that his act had been deliberate.

On Monday morning, the MCC Twitter handle posted the law related to the dismissal – about a fielder wilfully attempting to distract, deceive or obstruct either batsman – but did not say if de Kock was guilty or not.

In this case, the umpires did not take any action against de Kock, but if they had, Law 41.5.3 would have come into effect: “If either umpire considers that a fielder has caused or attempted to cause such a distraction, deception or obstruction, he/she shall immediately call and signal Dead ball and inform the other umpire of the reason for the call.”

South Africa captain Temba Bavuma said in the post-match press conference that de Kock’s act was “quite clever”, but “I don’t think he broke the rules in any kind of way”.

Zaman, meanwhile, felt it was his “own fault”, and not de Kock’s. “The fault was mine as I was too busy looking out for Haris Rauf at the other end as I felt he’d started off a little late from his crease, so I thought he was in trouble,” Zaman said. “The rest is up to the match referee, but I don’t think it’s Quinton’s fault.”