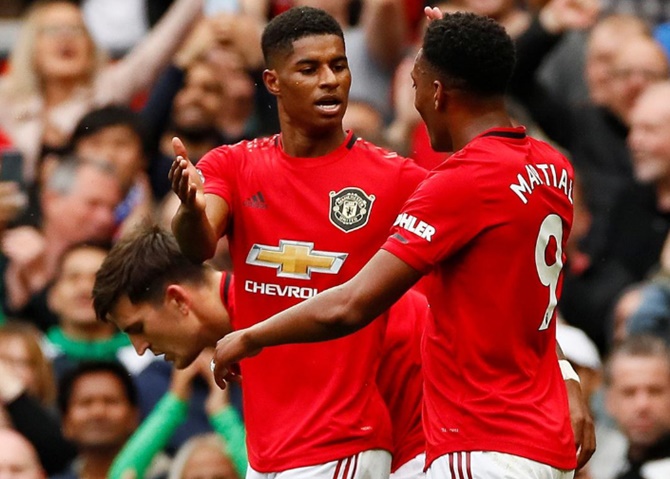 Manchester United forward Marcus Rashford has all the attributes to be as good as five-times Ballon d’Or winner Cristiano Ronaldo, manager Ole Gunnar Solskjaer has said.

Rashford scored in United’s 2-1 win over champions Manchester City at the weekend to take his tally to 10 league goals for the season, already equalling his best return in the top flight midway through the campaign.

The 22-year-old England international has 13 goals in his last 14 games for club and country and Solskjaer said he saw similarities with Portuguese forward Ronaldo, who scored 118 times in 292 appearances for United from 2003-2009.

“It’s very easy to compare the two of them, yes,” Solskjaer said.

“Both with skills, body shape, attitude, attributes — everything. The boy has every chance in the world to become a top, top player. Let’s hope he continues like this.”

Rashford has previously been criticised for a perceived lack of composure in front of goal but he is flourishing under Solskjaer, who scored 126 goals in 366 appearances as a player for United.

The Norwegian said there was much more to come from Rashford.

“As long as he keeps being positive and being direct and thinking about getting in front of the goal and getting chances, he’ll score goals,” Solskjaer said.

United, who are fifth in the Premier League, face Dutch side AZ Alkmaar in the Europa League on Thursday.

Amazon.com <AMZN.O> has secured the rights to broadcast top European soccer Champions League matches for the 2021/22 season in Germany, the U.S. company said on Tuesday.

Amazon said it would be broadcasting Champions League matches on Tuesday evenings from 2021.

Amazon’s move into broadcasting top sports events is seen as a way to boost its Prime subscription service rather than a bid to become a pay-TV operator, although its entry into the market is shaking up the multi-billion dollar battle for sports rights.

The company has had the audio rights for the German Bundesliga since 2017 and has just started showing the English Premier League after it won the rights to 20 matches a season including early December midweek games and Christmas games.

Champions League rights in Germany are currently held by Comcast’s <CMCSA.O> Sky, which charges 39.99 euros a month for its sport package.

Amazon has also bought rights for tennis and the U.S. National Football League (NFL) to bolster its offering, along with entertainment content such as motoring show “The Grand Tour” and drama “The Man In The High Castle”.