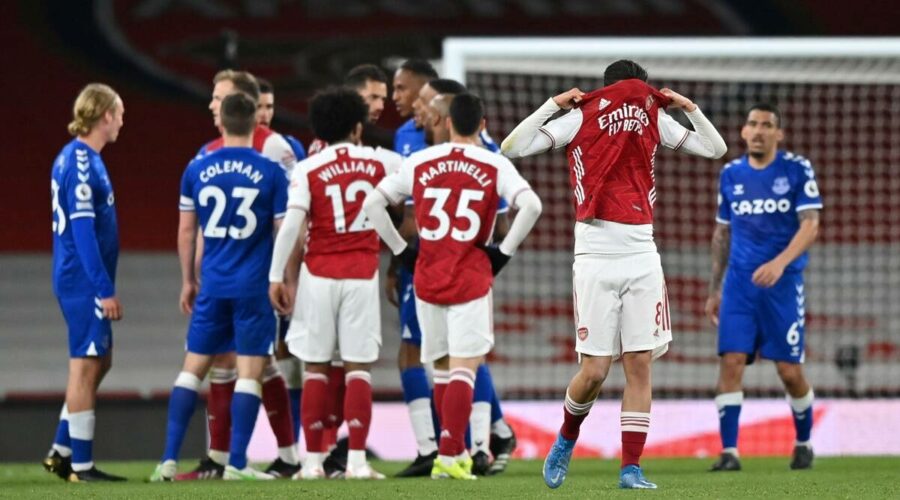 Fans set off pyrotechnics and flares in front of Emirates Stadium to demonstrate against Stan Kroenke's ownership amid anger over the club joining the Super League. Arsenal goalkeeper Bernd Leno’s blunder allowing an own goal to Everton was the decider in a 1-0 win for the visitors in the English Premier League on Friday.

The only other tumult in this otherwise dull match came outside the stadium as hundreds of Arsenal fans protested in front of Emirates Stadium before and after kickoff. They set off pyrotechnics and flares to demonstrate against Stan Kroenke’s ownership amid anger over the club joining the Super League.

Everton remained in eighth place, but the team was only one point behind rival Liverpool and in touching distance of the Champions League places. Arsenal stayed in ninth place.

Everton manager Carlo Ancelotti said his team was still fighting for a place in the top four, saying the race could go down to the last match of the season.

“We are still attached to the top of the table,” Ancelotti said. “This one we needed. We have to keep fighting.”

Arsenal started the match brightly and seemed to be in control in the early stages. But Everton started to cause problems for Arsenal, with Dominic Calvert-Lewin, Richarlison and Gylfi Sigurdsson all going close in the first half.

Everton came close to taking the lead when Sigurdsson’s 20-yard free kick curled over the wall and hit the crossbar in the 39th minute. The midfielder also nearly scored in the 47th, but Arsenal center back Rob Holding made a crucial block to put the ball out for a corner.

Arsenal thought it had a penalty in the 52nd when referee Jonathan Moss pointed to the spot after Richarlison clipped Dani Ceballos on his shin. VAR confirmed the foul, but Nicolas Pepe was found to be just offside in the buildup.

Arsenal came close in the 64th when Bukayo Saka’s free kick found right back Calum Chambers, but his shot bounced into the turf before going wide. Ceballos tested Everton goalkeeper Jordan Pickford two minutes later, but the midfielder’s strong shot was parried away.

It was Richarlison’s run behind Arsenal’s defense that finally broke the deadlock in the 76th after being set free down the left. He cut inside and his shot seemed to be covered by Leno, but the ball trickled between his legs and over the line for an own goal. Richarlison ran to the corner flag and did a celebratory dance.

But he said the team dug deep and “to beat them and take three points away from home is massive.”

It was Everton’s first away win at Arsenal in the Premier League in 25 years.

Arsenal substitute Gabriel Martinelli nearly scored an equalizer in added time, but Pickford just got a hand to the ball to push his shot away.

“We were the better team, but we didn’t have enough quality in the final third,” Arsenal manager Mikel Arteta said. “It’s damaging for confidence, because we’ve lost five points in the last two games.”