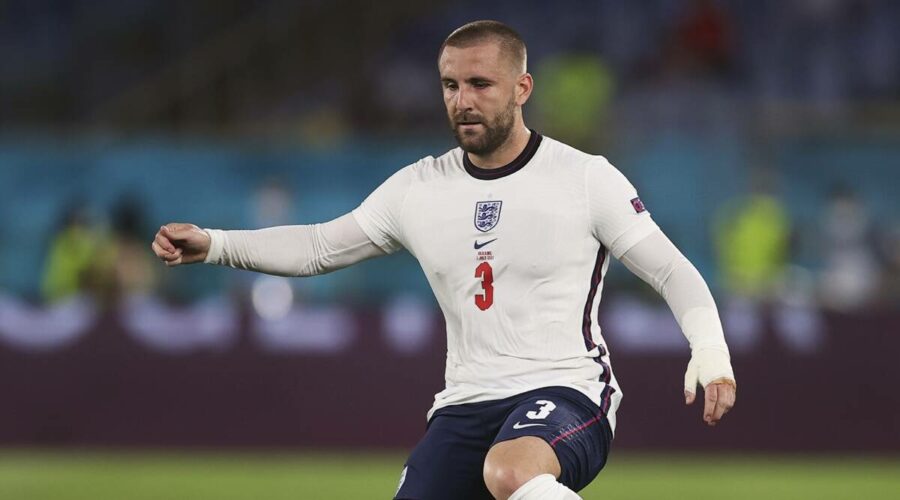 In Jose Mourinho’s new backyard, Luke Shaw made the former Manchester United manager eat his words – through a couple of assists for Harry Maguire and Harry Kane and his overall display in England’s Euro 2020 quarterfinal rout of Ukraine. Shaw’s performance was so impressive that even Brazilian legend Roberto Carlos applauded it on social media. Shaw’s England team-mate Declan Rice was quick to ‘pounce’ on the praise and coined a moniker, ‘Shawberto’, which has now become popular at St George’s Park.

After being sacked by Tottenham Hotspur, Mourinho has moved to take charge of Roma, a side that finished seventh in Serie A last season. Befittingly, Shaw dished out his best performance in the Euros yet at the Stadio Olimpico, Roma’s home ground. Only a day previously, Mourinho had checked in at his new base in Rome.

During his two-and-a-half-year spell at United, Mourinho’s handling of Shaw bordered on the insensitive. Time and again, he derided the player in public.

Exhibit 1: In 2017, after a draw against Swansea in which Shaw was substituted in the ninth minute, the then United manager aimed a thinly-veiled dig at the player. “At the moment, we cannot walk from the bed to the toilet without breaking a leg.” Mind, Shaw had just recovered from a double leg break.

Exhibit 2: After a 1-1 draw with Everton earlier in the season, Mourinho had claimed that Shaw was playing with his body and his manager’s brain. “He was in front of me and I was making every decision for him. He has to change his football brain.”

The grapevine has it that Shaw snubbed Mourinho’s approach and joined United in 2014, when the latter was managing Chelsea and the Portuguese has been bearing a grudge ever since. The carry-over effect continued to the ongoing Euros, as Mourinho, working as a pundit on talkSPORT, singled out Shaw’s “dramatically bad” corner-taking against Czech Republic. He had earlier backed Chelsea’s Ben Chilwell to start over the United defender.

Shaw’s response ahead of England’s Round-of-16 fixture against Germany was a cultured put-down. “He just needs to move on. Hopefully he can find his peace with that and finally move on and stop worrying about me. Clearly I’m in his head a lot and he clearly thinks about me a lot.” After the Ukraine match, when Mourinho finally heaped praise on Shaw, the left-back reacted with indifference.

Shaw now has the second-most assists, three, in Euro 2020, only one behind Switzerland’s Steven Zuber. The Swiss has returned home, while the boy from Surrey is going to Wembley for the semifinal against Denmark on Wednesday. Shaw is also on par with David Beckham in terms of the number of assists for an England player in a European Championship. Beckham had three at Euro 2000.

To find out how Shaw turned the corner, one has to rewind to early 2020 and a press conference at Carrington, United’s training base. Ole Gunnar Solskjaer was about 13 months into his job as United manager, the process of culture reset and cleaning up the mess had started, but Bruno Fernandes was yet to arrive at the club. In another injury-marred season, Shaw had started only 10 games and was in danger of conceding his place to an emerging Brandon Williams. Manchester Evening News gave the lowdown on what transpired at the presser.

Solskjaer was asked about whether the back four of Aaron Wan-Bissaka, Victor Lindelof, Harry Maguire and Williams was the one to build for the future. Shaw’s name wasn’t even mentioned. “And potentially we have the best left-back in England. Luke has the potential to be the best one. And that is the great challenge for him now,” said the United manager. After years of turbulence, Shaw finally had a manager who believed in him.

Solskjaer wasn’t just giving lip service. As a United season ticket holder said, the manager threw down the gauntlet and made Shaw believe that he has the ability to be the best left-back in the Premier League. A year-and-a-half down the line, Shaw won United’s Players’ Player of the Year award at the end of the 2020-21 season, got back into the England team and became Gareth Southgate’s first-choice left-back. “I was losing my belief. I think that is what changed with Ole,” Shaw had said in an interview with Sky Sports earlier this year.

As per Premier League stats, Shaw was ninth in the list in the 2020-21 season in terms of delivering the number of crosses, 189. whoscored.com tallied his number of key passes in the league last season at 72.

Mourinho’s ‘tough love’, that didn’t hesitate to throw his players under the bus, didn’t work with Shaw. He has flourished under Solskjaer’s human touch. In the national team also, Southgate has given him the licence to express himself. “Of course, I could go through a lot of people to thank but I think the most important one is obviously Gareth for trusting me and putting me in the squad and picking me and playing me,” Shaw said after the Ukraine game.

Born and bred in Kingston upon Thames, Shaw grew up as a Chelsea fan, idolising Gianfranco Zola. Chelsea’s development centre was his first port of call, but the club didn’t offer him an academy place. Very early in life, Shaw suffered a setback. In 2002, Southampton came calling and the club’s top-class academy nurtured a top-class talent. A senior team contract ensued in 2011 and Shaw started to make steady progress. In 2013-14, his form was impressive enough to make the PFA Young Player of the Year award shortlist and the United recruitment team was watching. In 2014, he signed a £30 million contract with United, becoming the most expensive teenager in world football in the process.

Shaw’s development continued under then United manager Louis van Gaal but the Hector Moreno tackle lay ahead. During a Champions League match against PSV Eindhoven in September 2015, the Mexico defender lunged into Shaw and the result was a double leg fracture on his right leg. The youngster has survived the career-threatening injury and Mourinho to return to his peak.

England’s ‘golden generation’ failed to win anything, for they hardly played as a team. Southgate’s ‘golden team’ is inching closer to offset a 55-year hurt – 1966 was the only time England won a major tournament – thriving on team spirit. And Shaw has become central to the Three Lions’ forward march.