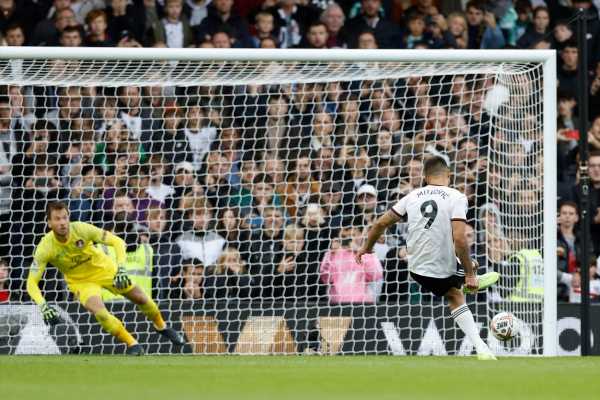 Aleksandar Mitrovic scored from the penalty spot on his return from injury to grab a 2-2 draw for Fulham against Bournemouth in a pulsating Premier League game at Craven Cottage on Saturday.

Mitrovic, recovering from an ankle knock, started slowly but burst into life with a snap-shot that was turned aside in the 22nd minute and Issa Diop brought Fulham level with a thumping header from the resulting corner.

Bournemouth got back in the lead seven minutes later when a defensive lapse from Fulham was punished, Solanke running at Tim Ream before cutting the ball back to Jefferson Lerma, who slotted it past Bernd Leno. Bournemouth could have gone in two goals up, at the break with a well-worked corner, but a brilliant double save from Leno denied Lerma and Adam Smith.

Fulham levelled again early in the second half when Mitrovic was wrestled to the ground by Lerma, and the 28-year-old Serbian striker made no mistake from the spot to net his seventh goal of the season.

With Bournemouth content to sit back, Fulham poured crosses into the box, but a tiring Mitrovic struggled to convert them.

He almost grabbed all three points for his side late on, but his left-foot shot towards the top corner lacked the power to beat Neto and he dragged another shot wide in stoppage time.

“I’ve been in a lot of pain, (but) painkillers helped a lot. I still haven’t completely recovered but managed to get the goal today. I had one or two chances where I could have done better, but that’s football,” Mitrovic said.

“The main target at home is three points, no matter whom we play. We conceded sloppy goals and I think that cost us the game. In the end, we managed to get the draw,” he added.

The sides remained close together in mid-table, with Bournemouth in the ninth spot on 13 points and Fulham 10th, one point adrift.

Bournemouth caretaker boss Gary O’Neil, who is unbeaten in six games in the league, was not happy about the penalty.

“It’s a terrible penalty decision. I’ve been told that Jefferson is holding Mitrovic, but why Mitrovic falls backwards, I have no idea. He pulls Jefferson over, otherwise, you wouldn’t fall that way. I think it’s a terrible decision,” he told the BBC. 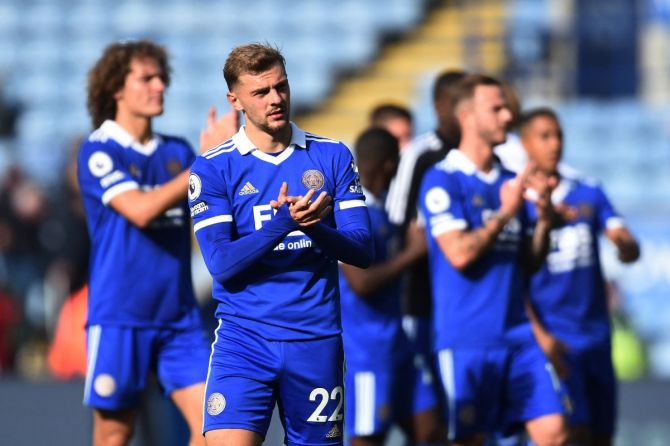 Leicester City’s poor start to the Premier League season dragged on with a dour goalless draw at home to Crystal Palace on Saturday, although the point they earned moves them off the foot of the table for now.

The lively James Maddison had the best two chances at the King Power Stadium but failed to hit the target on both occasions, while it took more than an hour for Palace to have a shot on target in a clash between two sides, short on confidence.

It was a second clean sheet in 10 league games this season for Leicester, who were greeted with boos from sections of the home fans at the final whistle, while it is a second goalless draw in a row away from home for Palace, who have not won on their Premier League travels since April.

“The performance was good. We were up against a good team who only had one chance in the game. We got into some really good areas, but did not have the final pass or that bit of luck that gets you the goal,” Leicester manager Brendan Rodgers told BT Sport.

“We can see the effort and talent of the players and I think we deserved to win the game. It was also a good clean sheet for us,”

There were no clear-cut chances in the first half, with Leicester forward Patson Daka stinging the palms of visiting goalkeeper Vicente Guaita and Marc Guehi heading over from a free kick at the other end.

Maddison shot wide twice in the second period with England manager Gareth Southgate watching on, while Palace had their first effort on target in the 64th minute as home goalkeeper Danny Ward saved well low to his right to deny Odsonne Edouard.

Leicester will host Leeds United in their next fixture on Thursday but do so without their talisman Maddison, who picked up a late yellow card for a dive in the box and must now serve a one-match suspension.