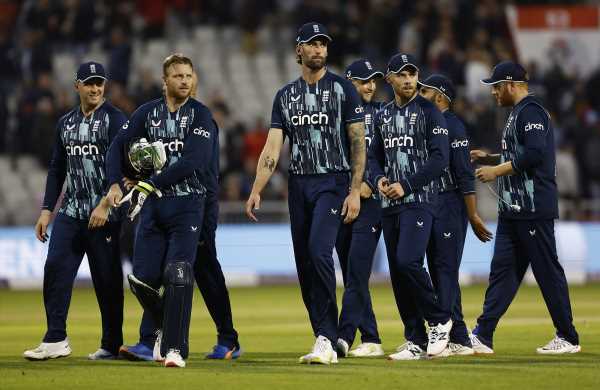 England swept to a dominant 118-run victory as they dismissed South Africa for a paltry 83 to win the second One-Day International at Old Trafford on Friday and square the three-match series at 1-1.

England set the tourists a target of 202 to win but South Africa had their top order swept away after slumping to 6 for 4 and were rumbled out in 20.4 overs for their joint lowest ODI score against England.

Rain delayed the start of play by almost four hours, restricting the game to a 29-overs per innings contest, with England bowled out for 201 in 28.1 overs, as South Africa looked to take the series after a 62-run victory in the opening ODI at Chester-le-Street on Tuesday.

But any advantage they might have had from winning the toss and putting England into bat amid gloomy conditions quickly faded as their top order collapsed.

South Africa never recovered with Adil Rashid mopping up the innings and finishing with figures of 3-29.

Heinrich Klaasen was South Africa’s top scorer with 33 runs and one of only three to get to double figures.

Liam Livingstone top scored for England with 38, contributing in a brisk 43-run partnership for the seventh wicket with Sam Curran as they hauled the hosts from 101-6 to 144-7.

Livingstone hit three successive sixes and then a four in the 21st over off the bowling of Anrich Nortje, who had the last laugh when he then bowled a slower ball to see Livingstone haul out to midwicket.

Curran made 35 off 18 balls while opener Jonny Bairstow scored 28 before being bowled by Dwaine Pretorius, who took 4-36 as he made an immediate impact following his inclusion in the team in place of Andile Phehlukwayo, who has been ruled out injured for the rest of the series.

The last of the ODI series is being played at Leeds on Sunday.