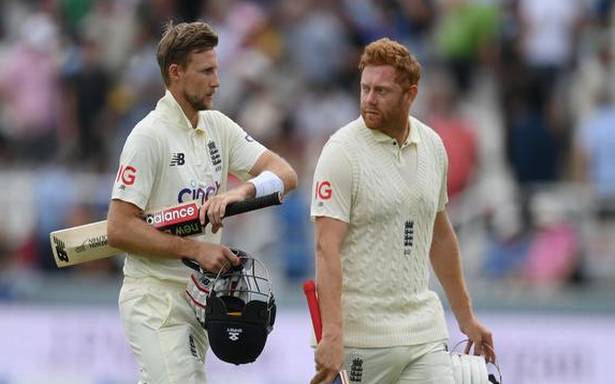 India’s total was built on impressive innings by their openers, with KL Rahul making a well-judged 129 and Rohit Sharma 83.

England captain Joe Root hit his third successive fifty of the series as India were denied a wicket on the third morning of the second Test at Lord’s on Saturday.

Root, was 88 not out and Jonny Bairstow 51 not out, with the Yorkshire duo sharing an unbroken partnership of 108 for the fourth wicket.

England resumed on 119-3, a deficit of 245 runs, after opener Rory Burns had fallen for a well-made 49 late on Friday.

They were once again left relying on Root, 48 not out overnight.

Not for the first time, the England skipper had come in to bat with his side in trouble, reduced to 23-2 when India paceman Mohammed Siraj removed Dom Sibley and the recalled Haseeb Hameed, out for a first-ball nought, with successive deliveries.

Root, the only England batsman to pass fifty in last week’s rain-marred drawn first Test at Trent Bridge, with scores of 64 and 109, went to another half-century with a stylish square-driven four off Siraj. It was his seventh boundary in 82 balls faced.

Bairstow, who started the day on six not out, found his touch with commanding straight-driven fours off Mohammed Shami and Siraj.

With little movement in the air or off a placid pitch, India captain Virat Kohli brought left-arm spinner Ravindra Jadeja into the attack for Saturday’s tenth over.

But nor was there much in the way of turn, with Bairstow sweeping Jadeja for four.

Conditions were more in favour of the batsmen than on the first two days but England, even though they had Mooen Ali and Jos Buttler to come, still had work to do to get back on level terms.

A legside clip single off Ishant Sharma saw Bairstow to a 90-ball fifty including six fours.

India’s total was built on impressive innings by their openers, with KL Rahul making a well-judged 129 and Rohit Sharma 83.

It was the 39-year-old swing bowler’s 31st five-wicket haul in 164 matches at this level and seventh at Lord’s.