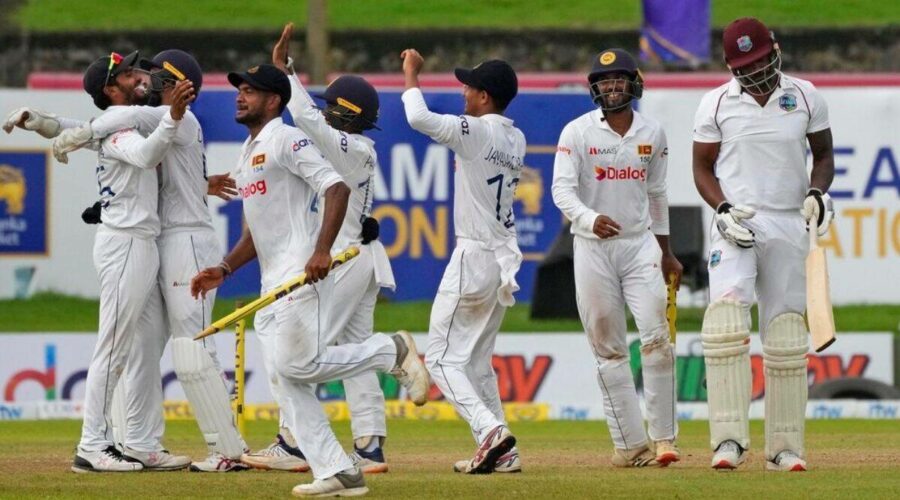 West Indies, needing 348 to win, already started the fifth and final day in survival mode at 52-6 and lasted until shortly after lunch. West Indies, needing 348 to win, already started the fifth and final day in survival mode at 52-6 and lasted until shortly after lunch.

Embuldeniya, who had innings figures of 5-46, had six wickets in the match while Mendis took 4-64 for a match haul of seven.

Nkrumar Bonner and Joshua da Silva, who came together at 18-6, frustrated the Sri Lanka bowlers as rain threatened to spoil the march. The pair added 62 more runs in the morning session until Embuldeniya broke the 100-run partnership when da Silva was caught in the slips by Dhananjaya de Silva for 54 runs.

Bonner top-scored with an unbeaten 68 off 220 balls, including seven boundaries. It was his third test half-century.

Sri Lanka captain Dimuth Karunaratne, who scored 147 and 83, was named player of the match.

“Even though it took time, we knew it was just a matter of one wicket,” Karunaratne said. “Joshua and Bonner were batting very well. We believed we will be able to win the match if we were able to get one of them out.”

Karunaratne said he was worried about his batting form because of a lack of training and match practice. Sri Lanka last played a test six months ago.

“When I came into this test I didn’t have runs behind my name and was doubting myself. I took a nervous start and fell into a rhythm which I continued to the second innings. But I still feel I haven’t reached my fine form,” Karunaratne said.