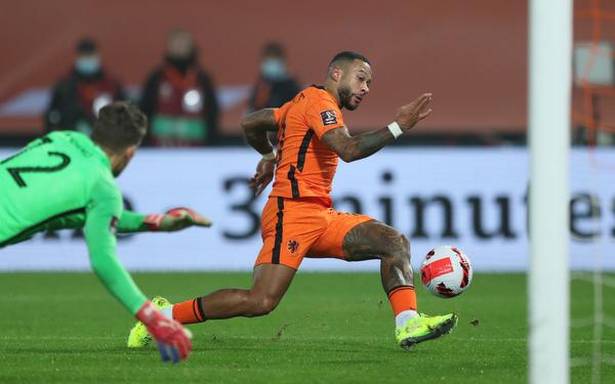 The Netherlands will be back at the World Cup after an eight-year gap, forcing Norway star Erling Haaland to wait until at least 2026 to make his debut on the biggest stage.

The Dutch did just enough on Tuesday with late goals in a 2-0 win in Rotterdam that eliminated the Norwegians who were missing Haaland, their injured 21-year-old forward.

Turkey overtook Norway into second place in Group G, winning 2-1 in Montenegro to enter the European playoffs in March.

Van Gaal’s team finished two points ahead of Turkey after the tightest three-way contest in the 10 European qualifying groups.

“Now we have a long preparation ahead of us, which I am sure will make us an even better team,” Dutch captain Virgil van Dijk said.

Ukraine also won away, 2-0 at Bosnia-Herzegovina, to join Turkey as unseeded teams who will be on the road again in the playoffs semifinals.

The unbeaten Ukrainians, who drew six of their eight Group D games, rose into second place above Finland, which was eliminated by losing 2-0 at home to table-topping France.

Kylian Mbappe set up Karim Benzema to score in the 66th before getting the second himself 10 minutes later after a speedy solo run down the left flank.

Wales and the Czech Republic started their Group E games on Tuesday knowing both were heading to the playoffs, with leader Belgium already having claimed the direct qualification spot to the finals tournament in Qatar.

Wales ensured it will be seeded in the playoffs by drawing 1-1 with the top-ranked Belgians in Cardiff to finish runner-up in the group.

The Czechs, who beat visiting Estonia 2-0, placed third in the group and take one of the two playoffs entries for teams that won a Nations League group last year.

Turkey, Ukraine, Wales and the Czech Republic completed the lineup of 12 nations that will compete for three tickets to Qatar in a tense six-day span in March.

They will go into three knockout brackets of four teams each when FIFA makes the draw on Nov. 26 in Zurich.