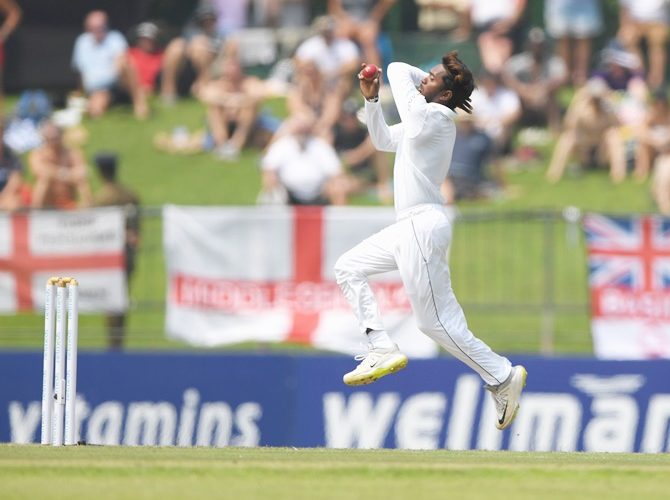 Sri Lanka’s Akila Dananjaya spun a web around New Zealand’s batsmen, picking up all five wickets on a rain-shortened opening day of the first Test, in Galle, on Wednesday.

Experienced batsman Ross Taylor held firm with an unbeaten 86 against the guile of Dananjaya to take the touring side to 203 for five when rain forced early stumps.

Mitchell Santner was the other unbeaten batsman at the crease, on eight.

Both sides selected three spinners for the Galle pitch and the 25-year-old Dananjaya, who in the past has been suspended from bowling in international cricket for an illegal bowling action, made a quick impact.

After New Zealand captain Kane Williamson won the toss and chose to bat, the opening pair added 64 before Dananjaya struck twice in the space of four deliveries to send back Tom Latham (30) and Williamson, who was dismissed without scoring.

Dananjaya then induced an edge from Jeet Raval to dismiss the other opener for 33 at the stroke of the lunch break to reduce New Zealand to 71 for three.

Taylor, a veteran of 93 Tests, staged a fightback for the Black Caps with Henry Nicholls and added 100 for the fourth wicket before Dananjaya dismissed the latter.

Nicholls failed to connect a sweep shot and was out leg before for 42 and BJ Watling soon joined him in the dressing room after being out in similar fashion to hand the off-spinner his fourth five-wicket haul in Tests. He ended the day with figures of 5 for 57 runs.

The two-Test series, with the second match set for Colombo, is the first for both teams in the newly-launched World Test Championship, which features the top nine Test-playing nations competing in a league across two years.