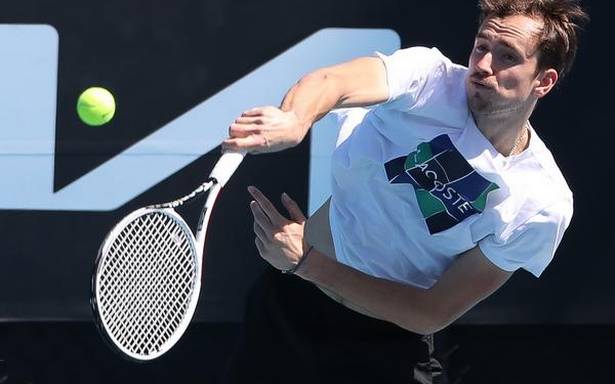 No. 4-seeded Medvedev moved into the third Grand Slam semifinal of his career and pushed his current winning streak to 19 matches by beating good pal Rublev 7-5, 6-3, 6-2

Here’s how uncomfortably hot it was during Daniil Medvedev’s Australian Open quarterfinal victory over Andrey Rublev: The winner needed to get a massage for cramping in his left thigh before he could stand up for his on-court TV interview.

The No. 4-seeded Medvedev moved into the third Grand Slam semifinal of his career and pushed his current winning streak to 19 matches by beating good pal Rublev 7-5, 6-3, 6-2 on February 17.

Medvedev said he had a hard time moving his left leg on the last three points while serving out the victory, and he could tell Rublev was cramping, too. A couple of times during a crucial portion of the second set, Rublev went over to a courtside box meant to hold the players’ towels and plopped himself down in the shade for a breather.

“It was not easy,” Medvedev said.

The all-Russian matchup only lasted about two hours, but it was still a struggle, with so many lengthy baseline back-and-forths — one particularly grueling point contained 44 strokes, including the serve — and the mid-afternoon sun carrying the temperature above 80 degrees Fahrenheit (near 30 degrees Celsius).

“We had some unbelievable rallies, and after the point, it’s tough to breathe,” said Medvedev, the runner-up to Rafael Nadal at the 2019 U.S. Open and also a semifinalist on New York’s hard courts last year after beating Rublev in the quarters.

“Actually,” Medvedev said, with a wry smile, “I think I am one of the first players to make Andrey that tired on the court, so I’m quite happy about it.” On Friday night, Medvedev will face Nadal or Stefanos Tsitsipas for a spot in the Australian Open final.

Nadal and Tsitsipas were scheduled to play the last men’s quarterfinal later Wednesday.

The other men’s semifinal will be No. 1 Novak Djokovic against 114th-ranked Russian qualifier Aslan Karatsev. The 27-year-old Karatsev is playing in the main draw of a major tournament for the first time, and he’s the only man in the professional era to make it to the semifinals of his Grand Slam debut.

He and Medvedev give Russia a pair of semifinalists at the same major for only the third time.

Medvedev and Rublev have known each other since they were kids. Medvedev — at 25, two years older — has always gotten the better of their matchups as pros, taking every set they’ve contested, mixing styles and covering the court so well with all of his 6-foot-6 frame.

“We’re going to play, I hope, for many, many years,” Rublev said, setting up a one-liner, “so at least once, I think, I will have a chance.” This time, it was even up until 5-all, when Medvedev nosed ahead with a hold, then broke at love to win the set with the help of a pair of missed backhands and a netted forehand from Rublev.

Another key stretch arrived midway through the second set.

With Medvedev up 3-2, and Rublev serving at deuce, they settled in for that 44-swing point that just had to take a physical toll on both men. And while Rublev earned that point when his friend-slash-foe missed a forehand, he seemed sapped afterward.

That’s when Rublev first took a seat for a bit of a respite. Later, at a changeover, he slumped back and leaned his head down, as though taking a nap on a park bench.

He managed to hold to 3-all, then really could have grabbed control of that set when he earned a trio of break points in the next game. But Medvedev steeled himself, played some terrific defense, and held to begin a three-game, set-claiming run.

“Mentally, it was, of course, tough, because you feel, always, that you cannot lose focus,” said Rublev, who is 0-4 in Slam quarterfinals, “because as soon as you will lose focus, it’s going to be over.” Rublev went to the locker room before the third, returning with wet hair, looking as if he had tried to cool off by hopping in the shower. It might have made him feel better, but did nothing to alter the outcome.

“My game matches his quite well. I know him [for a] long time,” Medvedev said, “so I know how to neutralise his amazing, big shots.”