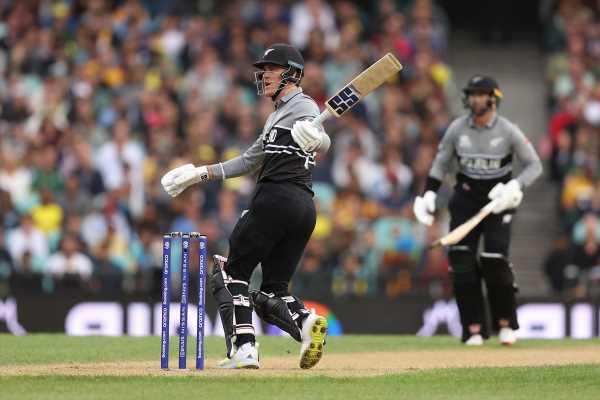 ‘Special knock for him, hit the ball really cleanly and put the bowlers under serious pressure.’

New Zealand’s Devon Conway paid tribute to his opening partner Finn Allen for the way he took on Australia’s vaunted pace attack as the Black Caps romped to an 89-run victory Twenty20 World Cup on Saturday.

Conway high-scored with an unbeaten 92 but he felt Allen’s 16-ball 42 in his first international against Australia had put the home quicks Josh Hazlewood, Mitchell Starc and Pat Cummins firmly on the back foot.

“I have to give a lot of credit to the way Finn played, because the way he played and the way he put them under pressure allowed me to get those balls that were slightly looser,” the South African-born left-hander told reporters.

“In T20 cricket, if you put bowlers under pressure, no matter how good you are, it’s obviously a tough gig.

“Serious effort from him today,” he added. “Nice and calm, nice and relaxed and focused at the same time. Special knock for him, hit the ball really cleanly and put the bowlers under serious pressure.”

With in-form England also in Super 12 Group 2 and only the top two progressing to the semi-finals, Saturday’s win at the Sydney Cricket Ground was a major boost to New Zealand hopes of reaching the knockout stage.

“Nothing changes for us,” said Conway. “We’ve got a process that we try and stick to, every game is another game.

“We’ve just got to make got focus on the things that we can control and take each day as it comes. We don’t look too far into the future … we just box smart and look forward to the next match in Melbourne.”

New Zealand, losing finalists in Dubai last year, face Afghanistan at the Melbourne Cricket Ground on Wednesday before matches against Sri Lanka, England and Ireland round out the Super 12.