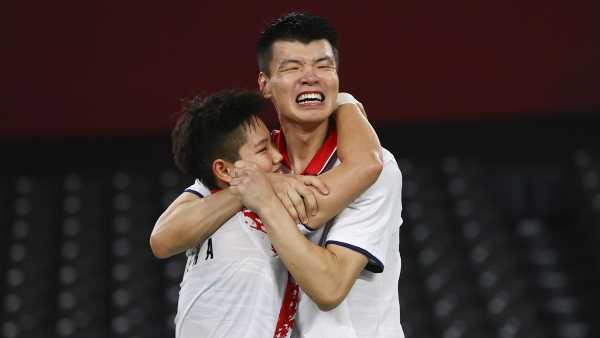 China, who have yet to lose a single badminton match to another nation at the Tokyo Olympics, won gold and silver in mixed doubles on Friday after Wang Yilyu and Huang Dongping beat favourites Zheng Siwei and Huang Yaqiong 21-17, 17-21, 21-19.

For over an hour, the four players who regularly train with one another put on a show of sharp drop shots, solid smashes and lengthy rallies.

After world number three Wang and Huang pulled off a rare win over their top ranked compatriots, both pairs were euphoric up on the podium and the new Olympic champions playfully bit into their gold medals.

“I feel blank,” said 6-feet-tall Wang, who was tackled onto the court with a hug by his much smaller team mate when they won.

“It was easier because it was our team mates – we didn’t have as much of a psychological burden.”

Japan bagged its first-ever Olympic mixed-doubles bronze medal when Yuta Watanabe and Arisa Higashino, who have played together for a decade, took out Hong Kong’s Tang Chun Man and Tse Ying Suet 21-17, 23-21 in a tight match.

Exhausted, the Japanese shuttlers both said there were times they wanted to throw in the towel. Watanabe said he is honoured to be the first Japanese man to win an Olympic medal in badminton.

Celebrated top women’s singles seed Taiwan’s Tai Tzu-ying got off to a rough start in a nail-biting match with Thailand’s Ratchanok Intanon, but she rallied in a series of flash backhand smashes to ultimately win 14-21, 21-18, 21-18.

At one point, Tai hit two stunning backhands in quick succession while on the floor, prompting disbelieving gasps and cheers from the scant audience at Musashino Forest Sport Plaza.

Yamaguchi’s exit ended Japan’s participation in badminton at the Games.

“Being patient is the only way you can win in the game,” Chen said. Because they both won, Chen next plays her team mate He Bing Jiao.

“It doesn’t matter now who wins the game tomorrow as long as we do our best,” she said.