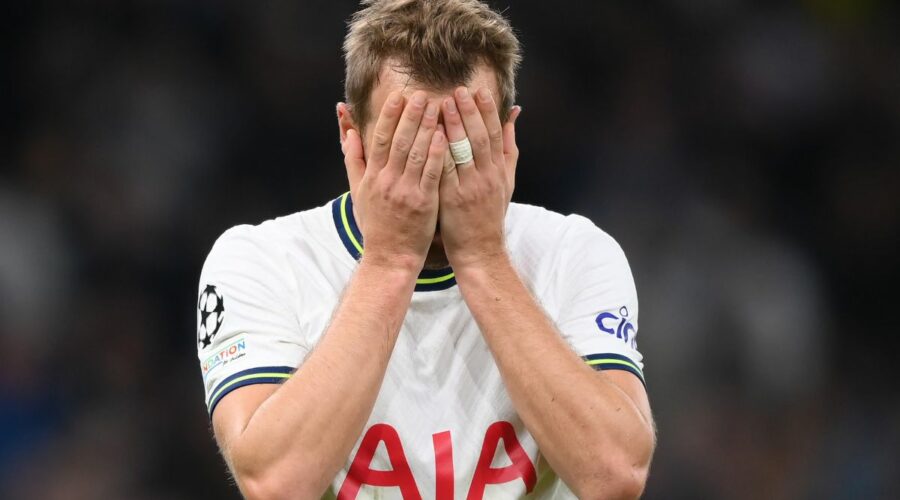 The controversial VAR decision to rule out Harry Kane’s stoppage-time winner against Sporting Lisbon on Wednesday prevented Tottenham Hotspur from progressing into the Champions League knockout stage as Group D winners with a match to spare.

Instead, Antonio Conte’s team now go into a final matchday with all four teams in the group, including Eintracht Frankfurt and Marseille, still in the running for a last-16 spot.

While Group D is the tightest, there are still several other issues to be settled next Tuesday and Wednesday, with 12 teams through to the next round but only three guaranteed top spots.

If two or more clubs are level on points at the end of the group stage, a number of criteria will be taken into consideration to decide the qualifiers for the next round, starting with the head-to-head record among the teams in question. It then goes to superior goal difference and then goals scored in those matches.

Here is a detailed look at the group permutations ahead of next week’s final round of games:

Napoli and Liverpool have clinched the top two spots with the Italians on 15 points and the English club on 12. The winner of the group will be decided in the final match between the two in Liverpool next week.

Ajax, on three, are almost certain of a Europa League spot ahead of their match against the Rangers, who do not have a point.

In a similar situation, Club Brugge (10) and FC Porto (9) have booked their knockout stage tickets but the group winner is yet to be decided. Porto host Atletico Madrid, currently in the Europa League spot, while the Belgians travel to Bayer Leverkusen, who are a point behind Atletico.

A win or even a draw against Leverkusen could be enough for Brugge to win the top spot.

Everything is settled in this group as Bayern Munich have comfortably secured the top spot with maximum points from five matches. Inter Milan, in second place on 10, also advance, leaving Barcelona in the third to compete in the Europa League. Viktoria Plzen are at the bottom of the group without a point.

A tense night is expected on the final matchday in this group with all four teams still in contention.

Leaders Tottenham Hotspur, on eight points, visit Olympique Marseille, in last place on six with a win or a draw enough to see them through.

Between them sit second-placed Sporting Lisbon and Eintracht Frankfurt, both on seven points, who play each other.

Should Tottenham lose and the other pair draw, Marseille would win the group with nine points and three teams would be locked on eight. In that scenario, Sporting would advance to second place, thanks to a win and a draw against the Londoners. Spurs would then be consigned to the Europa League.

Chelsea, the 2021 champions, are already through in first place ahead of their final group game with Dinamo Zagreb, whose best hope is a Europa League place. The second spot is a shootout between AC Milan and Salzburg, with the Italians needing only a draw at the San Siro.

Defending champions Real Madrid have secured qualification but the winner of the group has yet to be decided. They top the standings with 10 points and face already-eliminated bottom club Celtic.

RB Leipzig, on nine, travel to Shakhtar Donetsk, who have six, needing a draw to advance. A Shakhtar win would leave both on nine, with Shakhtar advancing on their head-to-head record.

This group has been decided with Manchester City making sure of the top spot. Borussia Dortmund, three points behind, advance as well but cannot dislodge City because of their head-to-head record. Sevilla, on five, are guaranteed a Europa League spot but as above, cannot overhaul Dortmund. Last-placed Copenhagen are already eliminated.

Paris St Germain and Benfica, both on 11 points and with an evenly balanced head-to-head after two 1-1 draws, have qualified already but the group win is still up for grabs.

The French side faces Juventus, on three points in third place and are desperate to salvage a Europa League spot from their disappointing campaign.

Benfica travel to Maccabi Haifa, also on three, with the Israeli club hoping for a third-place finish ahead of the Italians. PSG’s goal difference is +8 and Benfica’s is +4.