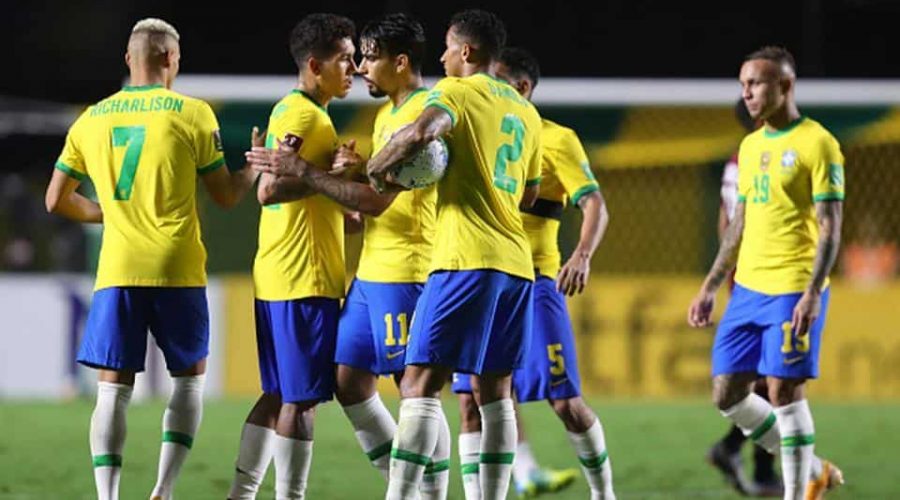 Brazil unconvincingly beat Venezuela 1-0 at home, but that was enough for coach Tite’s team to take the lead in South American World Cup qualifying with nine points from three matches. The winning goal in Sao Paulo was scored by Roberto Firmino from close range in the 67th minute.

Brazil did not have six players from its original squad for the match, including injured superstar Neymar. They will also be absent for Tuesday’s clash at Uruguay, which earlier beat Colombia away 3-0. Uruguay is in fourth position after the win in Barranquilla with six points, one behind second place Argentina.

The top four teams will automatically qualify for the 2022 World Cup in Qatar. The fifth-place team will go into an inter-continental playoff.

The Brazilians had four goals disallowed during the match – three for offside reviewed by video assistant referee and one because of a foul. But that did not hide the flaws of a disorganized team that had lost Neymar, midfielders Philippe Coutinho and Fabinho, and defenders Eder Militão, Rodrigo Caio and Gabriel Menino for the match.

Venezuela defended well during most of the match, but created little risk for goalkeeper Ederson. The only goal of the match at the Morumbi stadium came when midfielder Everton Ribeiro crossed from the right, left-back Renan Lodi won a head contest with Venezuelan defenders and the ball ended with Firmino, who just pushed it to the net.

But a mistake by Colombia defender Yerry Mina in the fifth minute gave Uruguay the lead. Mina lost the ball near his penalty box, Nahitan Nández pounced, and Cavani hit gently from close range, giving no chance to goalkeeper David Ospina.

Colombia missed a chance when Duván Zapata’s header hit the right post. Uruguay came back through a counterattack. Rodrigo Betancur stopped a Colombia push and fed Suárez. The striker passed it back to Betancur inside the penalty box and the midfielder was brought down by Jeison Murillo. Suárez, the top goal scorer in South American qualifiers, netted his from the spot in the 54th minute.

Nuñez made it 3-0 in the 73rd, and Colombia got into deeper trouble in the last minute when defender Mina was sent off after receiving a second yellow card. Colombia dropped to seventh place in the standings. It next plays Ecuador in Quito.

“In the two first goals we made mistakes,” Colombia coach Carlos Queiroz said. “We have to take responsibility. They made fewer mistakes and in soccer that is the team that wins.”

Also on Friday, Chile beat Peru 2-0 with Arturo Vidal scoring in the 20th minute with a screamer from mid-range and in the 35th, just pushing the ball past the line. The Chileans are now in sixth place with four points. Their next match is at Venezuela on Tuesday. On the same day Peru, in eighth position with only one point, will host second-place Argentina.