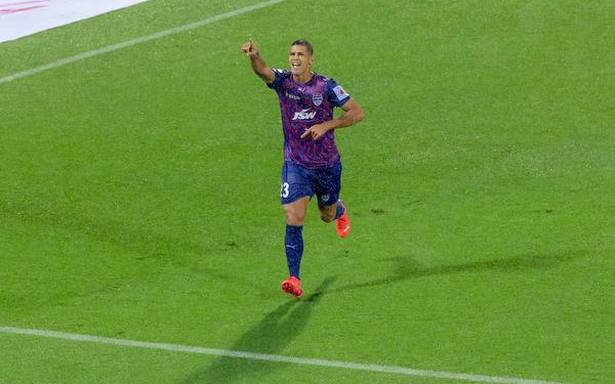 Registers a 4-2 win over NEUFC; Ibara nets on debut

Bengaluru FC shrugged off a chaotic opening few minutes to beat NorthEast United FC 4-2 in the first match of its 2021-22 Indian Super League campaign on Saturday.

On a rainy and slippery night at the Bambolim stadium, some slick play and fine goals sat comfortably alongside a surfeit of mistakes and a sumptuous own goal.

Cleiton Silva opened the scoring for BFC in the 14th minute, going around the NEUFC goalie to finish off a perfectly weighted through ball from Udanta Singh.

Khalid Jamil’s side equalised soon, with Deshorn Brown, formerly of BFC, outmuscling centre-back Musavu King to turn in a fine cross from the left by V.P. Suhair.

A bizarre own goal by Mashoor Shereef in the 23rd minute put BFC in the lead again. Udanta’s shot on goal, after Ashique Kuruniyan’s cross bounced off the bar, was saved by Subhasish Roy Chowdhury, only for Mashoor to smash it, like a hungry striker would, into his own net.

But NEUFC was soon back threatening, with winger Suhair taking full advantage of make-shift right-back Ajith Kumar’s faulty positioning. NEUFC’s second came on one such occasion, with Mathias Coureur slotting the ball home after some fine work from Suhair.

Jayesh Rane, though, ensured that BFC would go into the break ahead, driving a low ball past Roy’s outstretched right hand from the edge of the penalty box.

The rain relented after the break and with that BFC’s play became more cohesive. In the 81st minute, Congolese striker Prince Ibara scored on debut, five minutes after replacing Silva, to shut the contest down.