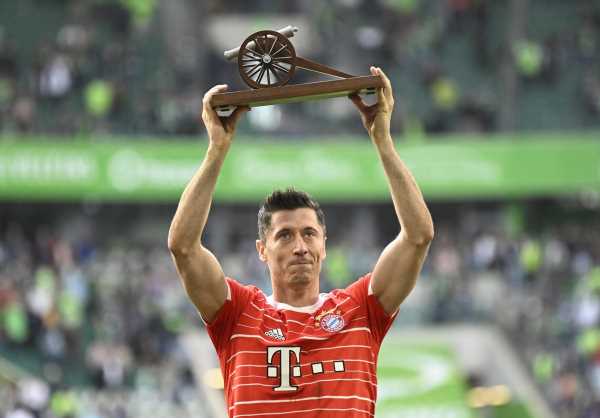 Champions Bayern Munich squandered a two-goal lead to end their season with a 2-2 draw at VfL Wolfsburg on Saturday but of more concern was confirmation that top striker Robert Lewandowski said he wanted to leave the club.

With the Pole in the starting line-up after informing the club of his wish to leave and not extend his contract that runs out next year, Bayern were in control from the start.

Josip Stanisic headed them in front in the 17th minute, setting a new league record with the club’s 48th away goal in a season.

Lewandowski doubled their lead in what could have been his last game for Bayern in the 40th minute with his 35th league goal of the season as he was crowned top scorer in the Bundesliga for the fifth season in a row.

Jonas Wind pulled one back for the host on the stroke of halftime and Max Kruse slotted in just before the hour mark to draw them level as Bayern ran out of ideas.

Borussia Dortmund forward Erling Haaland scored on his last game for the German club as they beat Hertha Berlin 2-1 on Saturday in the season finale, forcing their opponents into a relegation playoff.

Haaland scored with a penalty to level the score at 1-1 with his 86th goal in his 89th match in all competitions since 2020, as Dortmund finished runners’-up to champions Bayern Munich.

The Norwegian will join Manchester City next season in a multi-year deal reportedly worth up to 300 million euros.

Hertha took the lead with an 18th minute penalty, after Ishak Belfodil was brought down in the box and the Algerian stepped up to convert the spot kick himself.

But Dortmund eventually got a penalty of their own for a hand ball by Marvin Plattenhardt, and Haaland, who also scored on his debut in the Bundesliga, scored on his final appearance for the club to make it all square.

Youssoufa Moukoko’s superb low shot in the 84th that went in off the post snatched the three points for the hosts as Hertha finished in 16th following a dramatic stoppage-time winner for VfB Stuttgart over Cologne that lifted them to 15th and safety.

Hertha coach Felix Magath, who took over in mid-March with the team anchored in 17th place, had been looking to lead them to safety but he must now prepare his men for a playoff battle if they are to avoid relegation.