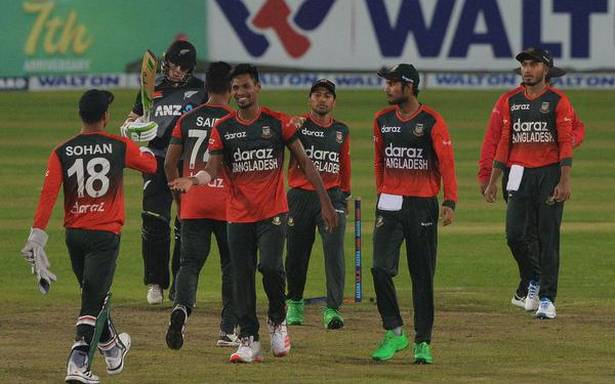 Bangladesh overcame a brilliant 49-ball 65 not out from New Zealand captain Tom Latham to clinch a four-run victory Friday in the second Twenty20 international and take a 2-0 series lead.

New Zealand needed six off the last ball of pacer Mustafizur Rahman but Latham made a single to bring the score to 137-5 in reply to Bangladesh’s 141-6.

Bangladesh won the opener of the five-match series by seven wickets, bowling New Zealand out for its joint lowest ever T20 international score of 60.

The visitors, however, fared better in the second game thanks to Latham, who came into the crease after openers Rachin Ravindra and Tom Blundell were removed in quick succession with New Zealand at 18-2.

Latham and Will Young appeared set to stabilize the innings but left-arm spinner Shakib Al Hasan (2-29) got the better for Young for 22.

Latham somehow managed to keep the team on track with support from Cole McConchie.

But a middle order collapse meant New Zealand still needed 19 runs to win from the last over.

With eight runs required in the last two balls, Latham failed to connect on both occasions.

Earlier, captain Mahmudullah made a 32-ball 37 not out to help Bangladesh post a decent total on this slow pitch after opting to bat first. Opener Mohammad Naim scored run-a-ball-39 and Liton Das added 33.

Offspinner Cole McConchie got the prized wicket of Shakib Al Hasan for 12 as New Zealand took the upper hand.

But Mahmudullah and Nurul Hasan put up 32 off 22 toward the end to help the side propel past 140.

Ajaz Patel, McConchie and Hamish Bennett scalped one wicket each to complement Ravindra’s 3-22.